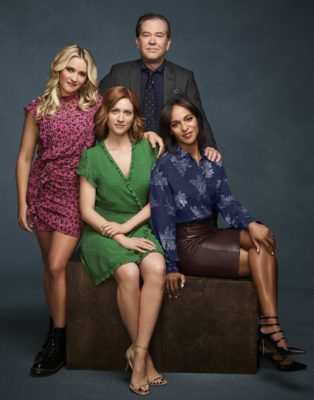 TV show description:
Based on the Australian drama series Sisters, the Almost Family TV show explores what it means to be a family and the potential emotional complications that new generations of In Vitro Fertilization (IVF) children can face.

In the series, Julia Bechley (Snow) is an adult only child who has her world turned upside down. She learns that her father, Doctor Leon Benchley (Hutton), a pioneer in fertility, secretly used his own sperm to father over a hundred children.

While still reeling from this revelation, Julia discovers that she has two new half-sisters — her former best friend, Edie Palmer (Echikunwoke), and ex-Olympic athlete Roxy Doyle (Osment). As the three daughters begin to reconcile their new reality, Julia starts life without having her dad by her side, Edie comes to grips with her sexuality, and Roxy faces adulthood out of the spotlight.

The trio attempt to bond as unconventional sisters while dealing with new siblings as part of a rapidly expanding and very untraditional extended family.

Series Finale:
Episode #13 — Expectant AF
Roxy makes a drastic decision in an attempt to help Isaac; Edie settles in with Amanda, but things get messy when she discovers something that isn’t in the plan.
First aired: February 22, 2020

What do you think? Do you like the Almost Family TV show on FOX? Do you think it should have been cancelled or renewed for a second season?

My 25 year old daughter and I loved this show … it was refreshing to see a nice sitcom again instead of all those reality shows. PLEASE BRING IT BACK

This was my favorite show of the season. I
Looked forward to watching it each week.
It had all the drama that kept my attention and I loved it. The actors did a great job playing the characters.

It was a great show! Bring it back for season
2

The had a good story, but the crammed into too many story plots too early on…its important to strength it out. The cast was great!

This was some of the best written and acted tv on the air. PLEASE give us a season two!

Loved the show please do not cancel

PLEASE DO NOT CANCEL THIS SHOW. MY HUSBAND AND I LOVE THIS SHOW.