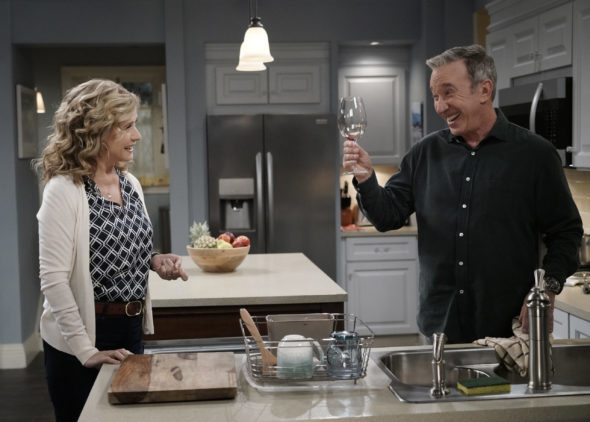 Last Man Standing is returning with a double episode premiere to FOX later on tonight, and the executive producer of the series, Kevin Abbott, revealed more about the new season in an interview with TV Line. Fans are about to see a big change for Mike and Vanessa, played by Tim Allen and Nancy Travis.

The couple will have to deal with the fact that the kids are out of the house, and they don’t have anyone left to raise. Abbott said the following about the impact of the couple being empty nesters will have on the FOX series:

“It kind of changes everything. We play on the fact that there are no longer any children in the house throughout the first 10 or 11 episodes. If part of your purpose every day is taking care of these people in the house, and that responsibility goes away, how do you react to that? Is it freeing, or is it somehow a loss?”

The series will also touch on the topics of politics and pregnancy as well. The politics will come into play when Vanessa decides to run for state assembly, and the new pregnancy is Kristin’s. She shares the news at a family dinner.

Last Man Standing will air all of season eight during the months ahead.

I love the show except not so much with the new Mandy. She’s not as funny and she just throws it off.

please bring the show back. I love it.

Love theshow needs to be renewed

March 18, 2020
It seems like there are new writers for the show. Plain and simply it is not funny anymore. I can’t figure it out. is it because of the change in cast, the writers or subject matter.
But, I miss the old show and I am done with this version.
Peter

The new episode that I saw was very sacreligious. Tim Allen Stepped over the line. I loved the show. But, can’t watch that because My Lord is insulted.

I am loving the 2 episode per week setup. I feel it won’t last, and honestly, they have the new child as Yu, a child in the house.
The old Mandy was loved for sure, would love to see her pop in and the entire family comment on how she is so familiar except for the new Mandy.
The lack of Chucks wife in the show has not been explained though?

LOVE THIS SHOW! Love Tim Allen! Great cast! Nice to have a little conservative tv for a change!

Love love love you are showing Last Man Standing! My very favorite show on Fox! Tim should send the patriots a little message at the end! Thank you for bringing this show back!

Enjoyable show! Though we really liked the original Mandy, the new actress is a hoot and fun. Good match with Kyle.

Story lines make no sense. and need Mandy back and Kiel should go back to how he was..