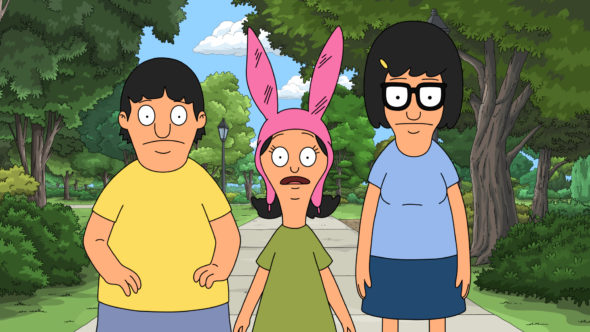 What’s on the menu in the 12th season of the Bob’s Burgers TV show on FOX? As we all know, the Nielsen ratings typically play a big role in determining whether a TV show like Bob’s Burgers is cancelled or renewed for season 13. Unfortunately, most of us do not live in Nielsen households. Because many viewers feel frustrated when their viewing habits and opinions aren’t considered, we invite you to rate all of the 12th season episodes of Bob’s Burgers here.

A FOX animated family comedy series, Bob’s Burgers stars the voices of actors H. Jon Benjamin, Dan Mintz, Eugene Mirman, John Roberts, Kristen Schaal, and Larry Murphy. Bob Belcher (Benjamin) is a family man and a third-generation restaurateur who lives on Ocean Avenue in a small seaside town. He operates the Bob’s Burgers restaurant with his fun-loving and happy-go-lucky wife, Linda (Roberts), and their three kids. Tina (Mintz) is their socially awkward and insecure eldest daughter. Middle child Gene (Mirman) is the family’s whimsical, good-natured, and a bit goofy, son. Mischievous and a bit of a schemer, Louise (Schaal) is the youngest child and daughter. While Bob has big ideas about burgers, his diner’s location is lacking and the rest of the clan falls a little short when it comes to service.

What do you think? Which season 12 episodes of the Bob’s Burgers TV series do you rate as wonderful, terrible, or somewhere between? Are you glad that Bob’s Burgers has been renewed for a 13th season on FOX? Don’t forget to vote, and share your thoughts, below.

Not a great show

I think they should also calculate streaming. Not all of us have cable to watch it when it premieres but a lot of us wait til the next day when it’s available on Hulu and immediately watch it because Bob’s Burgers is the best adult show to come around in a long time and we’d hate to see it die based on tv ratings. I’m already excited for season 13 and The Bob’s Burgers Movie coming to theaters next year!