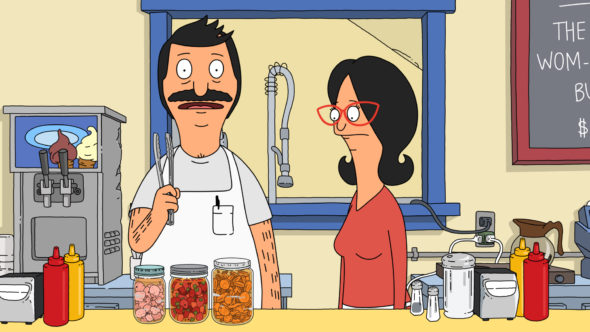 How long will this diner stay open for business? Has the Bob’s Burgers TV show been cancelled or renewed for a 13th season on FOX? The television vulture is watching all the latest cancellation and renewal news, so this page is the place to track the status of Bob’s Burgers, season 13. Bookmark it, or subscribe for the latest updates. Remember, the television vulture is watching your shows. Are you?

Airing on the FOX television network, Bob’s Burgers stars the voices of actors H. Jon Benjamin, Dan Mintz, Eugene Mirman, John Roberts, Kristen Schaal, and Larry Murphy. Bob Belcher (Benjamin) is a family man and a third-generation restaurateur who lives on Ocean Avenue in a small seaside town. He operates the Bob’s Burgers restaurant with his fun-loving and happy-go-lucky wife, Linda (Roberts), and their three kids. Tina (Mintz) is their socially awkward and insecure eldest daughter. Middle child Gene (Mirman) is the family’s whimsical, good-natured, and a bit goofy, son. Mischievous and a bit of a schemer, Louise (Schaal) is the youngest child and daughter. While Bob has big ideas about burgers, his diner’s location is lacking and the rest of the clan falls a little short when it comes to service.

The 12th season of Bob’s Burgers averages a 0.44 rating in the 18-49 demographic and 1.24 million viewers in the live+same day ratings (includes all DVR playback through 3:00 AM). Compared to season 11, that’s down by 15% in the demo and down by 4% in viewership. While these numbers don’t include further delayed or streaming viewing, they are a very good indicator of how a show is performing, especially when compared to others on the same channel. Though other economic factors are involved, the higher-rated shows usually get renewed and the lower-rated ones get cancelled. Find out how Bob’s Burgers stacks up against other FOX TV shows.

We don’t have to wonder if FOX will cancel or renew Bob’s Burgers right now since it’s already been renewed for season 13. I’ll update this page with breaking developments. Subscribe for free alerts on Bob’s Burgers cancellation or renewal news.

What do you think? Are you glad that the Bob’s Burgers TV show has been renewed for a 13th season? How would you feel if FOX had cancelled this TV series, instead?