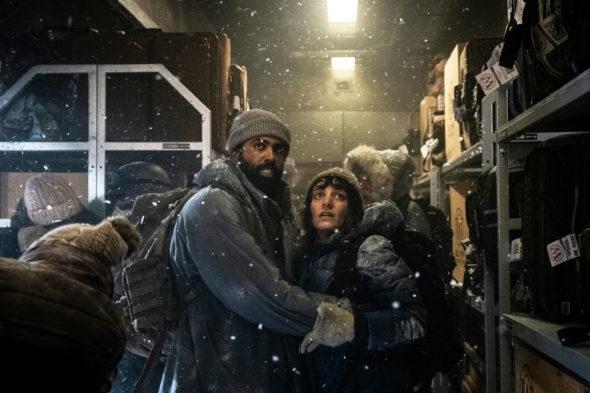 The train is nearing the end of the line. TNT has decided to end the Snowpiercer TV series with the upcoming fourth season.

A post-apocalyptic science-fiction thriller series, Snowpiercer stars Jennifer Connelly, Daveed Diggs, Sean Bean, Rowan Blanchard, Alison Wright, Mickey Sumner, Iddo Goldberg, Katie McGuinness, Lena Hall, Archie Panjabi, Annalise Basso, Sam Otto, Roberto Urbina, Sheila Vand, Mike O’Malley, Chelsea Harris, and Steven Ogg. Set more than seven years after the world has become a frozen wasteland, the series centers on the remnants of humanity who inhabit a perpetually moving train, Snowpiercer, that circles the globe with hundreds of cars. In the second season, Layton (Diggs) and Ruth (Wright) were banished to Big Alice’s compost car and they plotted to take back Snowpiercer. With the help of Javier (Urbina) and Alexandra (Blanchard), Layton and Ruth made it back to the train and rallied with their supporters. Josie (McGuiness) destroyed the Aquarium car, separating Snowpiercer’s head from the remaining 1,023 cars. Season three picks up with Layton and his inner circle commanding a small 10 car “pirate train” in search of Melanie (Connelly) and a possible warm location to restart civilization. Back on Snowpiercer, Mr. Wilford (Bean) is consolidating power while he awaits Layton’s return.

The third season of Snowpiercer averaged a 0.14 rating in the 18-49 demographic and 647,000 viewers in the live+same day ratings (includes all DVR playback through 3:00 AM). Compared to season two, that’s down by 42% in the demo and down by 28% in viewership.

A TNT spokesperson said, “We can confirm that Snowpiercer will end after a successful, multi-season run on TNT. Its talented writers, actors, and crew took an extraordinary premise and brought it to life in thrilling ways. It was critically acclaimed, had a significant impact on the post-apocalyptic genre, and now remains in the hearts and minds of fans forever.”

Snowpiercer was renewed for a fourth season in July 2021, ahead of the show’s third season debut. The series is the latest of the shows from the “T-nets” (aka TBS, TNT, and TruTV) to be cancelled by Warner Bros. Discovery following the company merger in April.

Season four is currently in production. Hopefully, there’s still enough time for the cast and crew to bring the story to a satisfying conclusion for the viewers.

What do you think? Are you looking forward to watching the fourth and final season of the Snowpiercer TV series? Are you sad to hear that the show won’t have a season five?

Another good series ending too soon, while the crap on the CW seems to go on forever.

And Another Series To End To Soon What A Waste Of A Excellent Series & Cast & Crew. All These Networks That Are End These Shows Are Idiots, Messing With All These People Lively Hood Just So They Can Put On These Fake Reality Shows, Just Because They Cost Less To Make But Yet They Recycle Cast Members From Previous Seasons & Put On New Seasons Or On Different One.

why is it that the shows that should end early don’t and the good ones end far too soon?

Snowpiercer is an AWESOME show but leave it up to the owners of TNT to get rid of another AWESOME show to put on like THE CW DID CALLED FLASH NOW HAT IS A SHOW HA NEEDED TTO END YEARS AGO!!!! PLEASE keep Snowpiercer alive for the show is so LOVED by many !!!!!!!!!!

I’ve enjoyed the show quite a lot, but I think one last season feels about right. I’m just thankful they’ll have an opportunity to wind things up to a satisfactory conclusion.

BOO to the TNT

It’s a shame really. A mixed bag sometimes, but overall the story has been good.

It is about time it ended, before it runs out of ice.

Jennifer Connelly was missed in the last season, a strong presence. Alison Wright has been a strong actor as usual, along with Mike OMalley and Mickey Sumner.