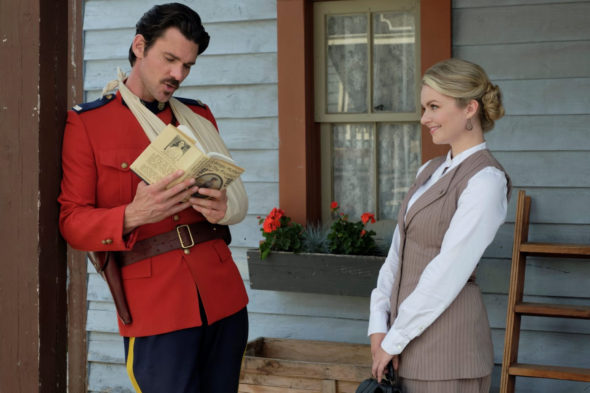 A Hallmark Channel romantic drama series, When Calls the Heart stars Erin Krakow, Jack Wagner, Kevin McGarry, Chris McNally, Andrea Brooks, Kavan Smith, and Pascale Hutton. Others in the cast include Ben Rosenbaum, Johannah Newmarch, Martin Cummins, Kayla Wallace, Viv Leacock, Natasha Burnett, Vienna Leacock, Elias Leacock, Hrothgar Mathews, Loretta Walsh, and Amanda Wong. Inspired by the Janette Oke novel, the TV series follows Elizabeth Thatcher (Krakow), a young teacher from a high society background. She’s assigned to teach in a coal country classroom and it’s a life-changing experience. Now a widow and single mother, Elizabeth faces new challenges but enters into a new relationship with mysterious gambler Lucas Bouchard (McNally). In season nine, Hope Valley is in a state of growth, with the foundry’s progress and the evolution of key relationships. The Mayoral race has the town buzzing with a few members of the town running against one another. Elizabeth and Lucas focus on their relationship beyond courtship, and as she gets to know Lucas better, she learns about his past which gives Elizabeth pause about their future.

Season 9 was wonderful. It’s sad that some on here are deliberately trying to destroy this series.
I’m a Nathan fan, and I love how Nathan is doing this season. I loved all the episodes, because of the gorged friendship between Nathan and Lucas is buffing. Rosemary and Lee finally pregnant. Nathan’s heart aches is healing and ready to find love again. All the residents and the feeling of community.
It was wonderful. I hope WCTH will be renewed soon

Thought for sure that Lucas was caught and Elizabeth would break up with him. Some day she’ll wake up. There’s still something about Lucas that’s not right. Opening the mine will bring a lot of heartaches.

I do not now or never will accept them together

Hallmark should be ashamed of themselves. Calling WCTH family friendly. Having Lucas spend the night over E & little Jacks home. Unacceptable. The sensual touching & kissing all of the time. The illusion that Mae was married, but not. Using Mae to stir the emotions of Nathan fans knowing that Mae & Nathan were not going to be romantically involved. Saying that Lucas is mischievous to get Nathan fans to watch the show. The worst part was kicking the Nathan fans throughout season 9. Great way to bring unity to a divided show. Change the name of the program This… Read more »

Go show….Elizabeth go back with Nathan.

Season 8 was the last I watched. I am not watching this season. This story is about a Mountie and school teacher. Not interested any more.
I think there are a lot of people that quit watching and it will show in the ratings. I hope it’s cancelled. I don’t like seeing the previews that show up on Hallmark, makes me ill.

I love season 9 of WCTH. Great writers and directors and an awesome cast. This show is the best season ever. Enjoying each story line of the different characters. Elizabeth & Lucas are so great. A cast of totally awesome actors. With so much craziness in the world, this show is a breath of fresh air for many of us. Love it. Looking forward to season 10.

I hope it is canceled. Not the same. Don’t watch since they changed the story line. Montie should be with main character. It is not a sweet story that I want my daughter to watch. Very sad.

I love the show, I want it to continue for at least 2 more seasons. I love the couple Lucas and Elizabeth. I think the first 2 episodes focused very little on their relationship. We left with a very high note in S8 and it wasn’t on the same note in S9E1

I hope the show is cancelled. It has no loyalty to its viewers who made it a hit, so I hope it bites the dust.