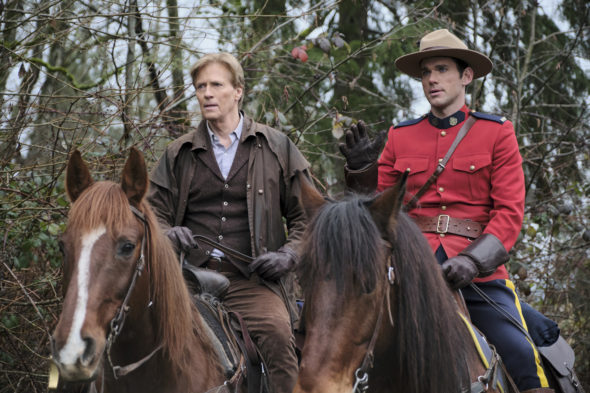 How much bigger will this town get? Has the When Calls the Heart TV show been cancelled or renewed for a ninth season on Hallmark Channel? The television vulture is watching all the latest cancellation and renewal news, so this page is the place to track the status of When Calls the Heart, season nine. Bookmark it, or subscribe for the latest updates. Remember, the television vulture is watching your shows. Are you?

The eighth season of When Calls the Heart averaged a 0.19 rating in the 18-49 demographic and 2.41 million viewers. Compared to season seven, that’s down by 19% in the demo and even in viewership. Find out how When Calls the Heart stacks up against other Hallmark Channel TV shows.

Will Hallmark Channel cancel or renew When Calls the Heart for season nine? The series has been the channel’s most successful series for a while. I think it will be renewed but wonder, with all of the cast additions over the years, if this could potentially be Krakow’s final year. Could Lori Loughlin return? I’ll update this page with breaking developments. Subscribe for free alerts on When Calls the Heart cancellation or renewal news.

What do you think? Are you glad that the When Calls the Heart TV show has been renewed for a ninth season? How would you feel if Hallmark Channel had cancelled this TV series, instead?

I have watched every show from the beginning, this season 8 had very poor acting especially the Nathan and Elizabeth characters At this point I wouldn’t miss the show if cancelled

Season 8 has been the worse. Elizabeth has been so wish-washy about Nathan and Lucas. She seems to meddle into everyone’s life like she is the queen of Hope Valley. Also, bring Bill Avery back into the plot, please. This season, the plot has been lackluster, and the characters have been weak.

I agree, I am very disappointed in the show this year and I have watched every episode since the beginning.

The best show on TV.. please have a ninth season !

Please, please ,please have a Season 9 of When Calls the Heart. This show is my favorite of all shows. And it is family viewing and Leads from the ❤️

Please do not cancel When Calls The Heart. Love this show. It is clean and suitable for family viewing.