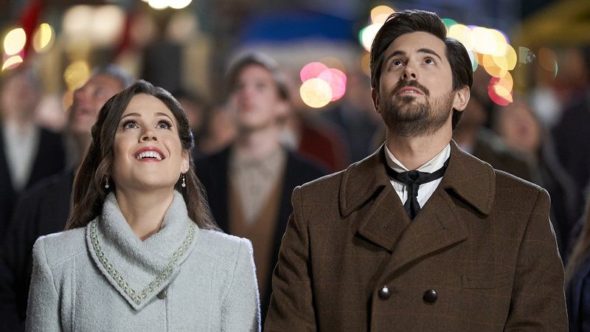 The seventh season of When Calls the Heart averages a 0.25 rating in the 18-49 demographic and 2.38 million viewers (Live+same day ratings). Compared to season six, that’s down by 9% in the demo and down by 3% in viewership. When Calls the Heart is still Hallmark Channel‘s highest-rated TV show.

STUDIO CITY, CA – April 26, 2020 – Hallmark Channel has ordered an eighth season of the network’s original, primetime drama series “When Calls the Heart.” It was announced today by series star Erin Krakow during the season seven finale of the hit show.

Currently ending its seventh season, the hit drama “When Calls the Heart’s” ratings momentum continues, with this season’s previous episode 7009 ranking as the highest-rated episode in the series’ history. The program ranked as the #1 original scripted series of the week and marks the #2 original scripted series on ad-supported cable in 2020-to-date among Households, Total Viewers and Women 18+. On a Live +3 basis, the program delivered a 3.3 Household rating, 3.1 million Total Viewers, and 477,000 Women 25-54. The episode reached over 3.7 million unduplicated total viewers.

When do When call the Heart back

Love it! I have every season. Please keep renewing

My favorite weekly show on Hallmark. Look forward to Sunday nights. Can’t wait for Season 8 to begin. Will certainly miss the Christmas special episode this year.

When calls the heart is my favorite TV show…just keep it going and I’ll be thrilled ❣️. Thank you ❣️

I love this show & look forward to many more seasons. Even with the departure of major characters, I think the writers have done a great job making the transitions smooth and painless. Even though I like both current lead actors/characters are great, I still admit to missing Daniel Lissing. I would also welcome possible future cameos by Lori Laughlin, if she ever has the freedom & opportunity to do so.

I love When Calls the Heart. Team Nathan all the way!!

I am a huge fan of When Calls the Heart. I am looking forward to Season 8.

I have so many obsessed shows that have ended in the last few years, but I’m so glad this one is still going. Can’t wait for next season!

The writers do an outstanding job keeping this show exciting and relevant. How refreshing!! The actors do such a fine job and seem to care about the fate of the show. Their caring shows through, Thank you all.

This is show is my favorite on the air today. It is a great family show and I look foreword to Sunday nights. I hope that it continues for years to come.

This is probably the best overall family show to come along in a great many years. I am a dedicated fan and do my part to tell others about it and the high standards and morals exhibited in each episode. I look forward to many more seasons to come.

This is my favorite show. Glad it was continued this year and hope it will continue for a long time since good moral shows are hard to find these days. Thanks for all you do in making good viewing.