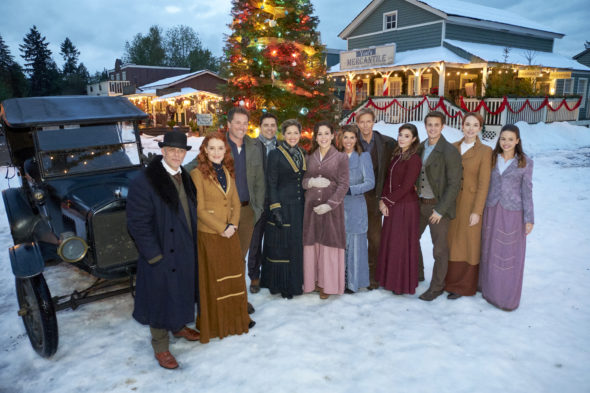 Is there still hope in Hope Valley? Is the When Calls the Heart TV show cancelled or renewed for a seventh season on Hallmark Channel? The television vulture is watching all the latest cancellation and renewal news, so this page is the place to track the status of When Calls the Heart, season seven. Bookmark it, or subscribe for the latest updates. Remember, the television vulture is watching your shows. Are you?

The sixth season of When Calls the Heart averaged a 0.27 rating in the 18-49 demographic with 2.46 million viewers. Compared to season five, that’s down by 4% in the demo and up by 1% in viewership. Learn how When Calls the Heart stacks up against other Hallmark Channel TV shows.

Will Hallmark cancel or renew When Calls the Heart for season seven? I’m sure that the series will be renewed. In addition, a spin-off called When Calls Hope will premiere on Hallmark’s streaming service in 2019. I’ll keep an eye on the Nielsen numbers, as we wait for an official announcement. Subscribe for free alerts on When Calls the Heart cancellation or renewal news.

4/13/19 update: When Calls the Heart has been renewed for a seventh season by Hallmark.

What do you think? Should the When Calls the Heart TV show have been renewed for season seven? How would you feel if Hallmark Channel had cancelled this TV show, instead?

I think its GREAT THET WHEN CALLS THE HEART TELEVISION SERIES will be back fer the eighth season……!!!!! TEACHER Elizabeth and her Love interest…saloon owner……Lucas…….should DEFINITELY MARRY. WOW, THE GREAT MATCH THEY WIL MAKE. AND HES GOT SPUNK WITH HIS HUMOUR AS WELL. AS FER LEE AND ROSEMARY COULTER THEY CAN ADOPT BUT THEY NEED SOME CHILDREN OF THEIR OWN AS WELL. AND LEE AND ROSEMARY COULTERS HUMOUR IN THIS SHOW IS SIMPLY FANTASTICALLY…I LOVE THEIR GENEROUS HUMOUR AND MOUNTIE BILLS HUMOUR AS WELL! YES mountie Bill needs married and I think Fiona would make ah GREAT wife fer him.… Read more »

I would love to see the show: When calls the heart show every week & not be off for 6 months it’s a very sweet show – please continue weekly thru out the year .

Can’t wait for the 7th season to start

PLEASE continue When Calls The Heart! It’s one of my favorite shows to watch, and I never want it to end! I’d love many more seasons, AT LEAST two or three more. So much needs to happen still; Carson and Faith need to figure things out, Jesse and Clara need to get married, the whole Abigail thing needs to be sorted out (considering how Lori Loughlin is out of the picture), and Elizabeth and Nathan Grant need to get together!!!! And I’m still hoping that Lee and Rosemary will be blessed with a child ♡ Even if it’s one of… Read more »

Please do not cancel When Calls the Heart. Always look forward to watching it, and anxious to see new episodes. It’s good clean TV watching with Christian values.

Please do not cancel When Calls the Heart. We need more of this type of series in our lives. Just please be sure to match Elizabeth Thorton with Mr Bouchard. Love that couple together!!!

It was the best show. I looked forward to it every week. It’s so wonderful to see a movie that has some good n love in a world that’s gone crazy.
Please renew for season 7&8. Love it.

Please continue When Calls the Heart. It is my favorite show. I think the transition omitting Anigail was done smoothly, and I am anxious to see what transpires next!

I love this show! Don’t ever cancel! Sunday night is my night to prepare and be ready to watch this heartfelt and exciting show!
Just forget about Abigail! She’s gone! The last few episodes of season six has moved on from her!

Please, please don’t cancel this show. I look forward every Sunday to watching When Calls the Heart. Just replace Abigal and move on. We definitely need more shows like this on TV.