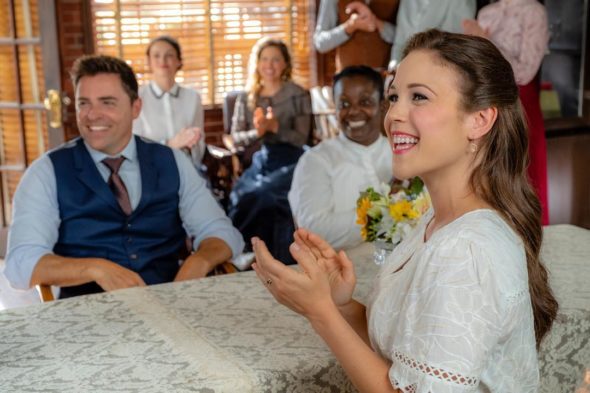 As you may have heard, season six of When Calls the Heart was pulled off the air and the remaining episodes of the season were “retooled” to edit out Lori Loughlin’s character (following Loughlin’s involvement in a college admissions scandal). Some fans were worried that the series would be cancelled but that’s not the case.

On Wednesday, Hallmark announced that season six of When Calls the Heart would resume on May 5th.

Now, Hallmark has revealed that the series has been renewed for a seventh season. You can read about it below.

STUDIO CITY, CA – April 13, 2019 – Hallmark Channel has ordered a seventh season of the network’s original, primetime drama series “When Calls the Heart,” it was announced today by series star Erin Krakow during the premiere of the network’s Spring Fever movie, “Bottled with Love.”

Currently in its sixth season, the frontier drama “When Calls the Heart’s” ratings momentum continues, with this season’s debut episode ranking as the highest-rated premiere in the series’ history. The program ranked as the #2 original scripted series of the week, only behind AMC’s “The Walking Dead”, and marks the #3 original scripted series on cable in 2019-to-date. On a Live +3 basis, the program delivered a 2.9 Household rating, 3.1 million Total Viewers, and 449,000 Women 25-54. The episode reached over 3.6 million unduplicated total viewers.

“When Calls the Heart” has enjoyed year-over-year rating’s growth, quite a feat for a show in its’ sixth season,” said Michelle Vicary, Executive Vice President, Programming and Network Publicity, Crown Media Family Networks. “It is one of the top-rated shows in cable, premiering in the #2 position on Sundays, television’s most competitive night. The show’s themes of love, faith and community have resonated with millions upon millions of viewers, and we are delighted to deliver more uplifting, positive storytelling in season seven.”

What do you think? Do you like the When Calls the Heart TV show? Will you be watching season seven of this Hallmark series?

This is a wonderful show. I don’t miss the two actors that are gone. The show has continued very well without them. The new Mountie is handsome. Love interest?

Acting and Directing. Has been on the decline. Trite story lines. May 27 show was particularly bad.
Please bring back “quality “ as seen in the first few seasons. Fans cannot be loyal to a show that doesn’t respect their viewers.

I have watched WCTH since it first aired. I will continue to watch. As for the loss of Lori is unfortunate.

I am so looking forward for When Calls the Heart to come back. I love this show. I will miss Lori very much. She did something that was wrong. But don’t we all make mistakes.?I can’t wait for the show to return.

YES…I will be watching this season and next season. I’m SO excited to have it continue. Such as awesome show!!!!!!!!!

I love the show When calls the Heart