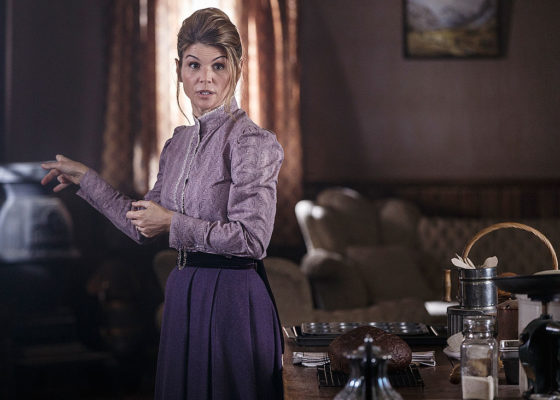 Things are not going well for Lori Loughlin. According to The Hollywood Reporter, Hallmark has severed all ties with the When Calls the Heart co-star following her arrest.

Earlier this week, Loughlin was arrested by the FBI after being accused of participating in a nation-wide college admissions scheme. The Full House star has been a cast member of Hallmark’s hit series When Calls the Heart since its debut in 2014. Additionally, she stars in the network’s film series Garage Sale Mysteries.

Hallmark Channel released a public statement announcing their separation with Loughlin. The network doesn’t specify if they’ll continue to air the current season of When Calls the Heart but it seems likely that they will. If Heart is renewed for a seventh season, it appears that Loughlin’s Abigail Stanton character will not be a part of it.

We are saddened by the recent news surrounding the college admissions allegations. We are no longer working with Lori Loughlin and have stopped development of all productions that air on the Crown Media Family Network channels involving Lori Loughlin including Garage Sale Mysteries, an independent third party production.”

What do you think? Are you a fan of When Calls the Heart? Will you keep watching the Hallmark series? Does Loughlin’s arrest affect your feelings about her or the shows she’s on?

One of the best TV shows. Me and my wife really enjoyed every show. I say it’s human to error. Please bring back Garage Sale Mysteries with Lori, please.

I think it’s stupid to fire her. I love garage sale mysteries. She is a great actress. The schools are the main culprits

I find it very disturbing that one star’s alledged actions can ruin a whole casts livelihood not to mention the fans enjoyment of a show. “Roseanne” continued after her fopah. Why can’t Halmark just replace Laughlin and continue on with the series? I truely loved Lori as an actress and it breaks my heart she was even involved in this mess, but her bad choices should not affect all of us. Thanks for listening.

I truly love the Garage Sale Mysteries and hope you continue the series. If you can’t find a way to make ” Dani” the lead character, then bring someone else in and keep the series going.

I am still a big fan of garage sale mysteries and the star. Inocent until proven guilty. Would love to see the show return.