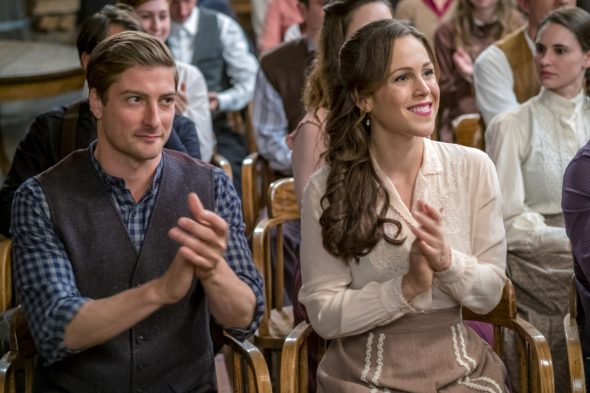 Big news for fans of When Calls the Heart. Today, Hallmark Channel announced they’ve renewed the TV show for a sixth season.

When Calls the Heart has been a breakout hit for Hallmark Channel and ratings have actually increased for the series this year. So far, season five is averaging .28 rating in the 18-49 demo and 2.471 million views.

What do you think? Do you watch When Calls the Heart? Are you glad it’s been renewed?

Please find a way to bring back When Calles the Heart. I loved this series and looked forward to watching every Sunday night. Not only season 6 but more to come in the future! So little is worth watching now and this was a wholesome family series.

I am 62 and I love “When Calls the Heart” I am sorry about Lori but I honestly feel there is enough story line to proceed without her. Maybe She had to leave abruptly and appoints someone else as the town mayor. Of course, Cody will have to go with her or Abigail’s daughter-in-law can raise him.

Absolutely love , when calls the heart. Every actor actress was picked perfectly for their role, watching this show helps me a whole lot for my depression….I see the moral side of people and I see the love the people have for one another and the willingness For helping each other in hard times. I can only pray that Lorie her lesson and that forgiveness will be given to her at a later time for which she could possibly return to WHEN CALLS THE HEART. This shows talks about second chances and forgiveness, I pray the CEO of HALLMARK, will… Read more »

When calls the heart is a great show,full of life without the”sex sells”content that’s in most all TV shows and movies produced today.i enjoy it .waiting for season 6 to see how it pans out without jack.

I love this show and have watched it since the beginning. That I am very upset that I killed j*** o** I do plan on watching the Christmas episode in seeing the baby born but then I plan on stopping to watch it it is awful that they could not let Jack in his wife raised their baby together

Jack, Daniel Lissing, wanted off the show. It is heart wrenching he won’t be on the show but the show didn’t release him.

I love watching this series with my 12 years old daughter. We are ready for season 6!

I love this series but was very disappointed when Daniel Lising’s character was killed off the show. Actually heartbroken as well. It’s like tv writers think their audience won’t watch if the characters are living happily ever after! Trust me, we will and much longer. I was thinking about not coming back but reluctantly I did. With my heart broken and the show will never be the same. Sorry.

I am spellbound by this series. I don’t have cable tv so have watched When Calls the Heart on Netflix. I have stayed up until late to see what happens with each episode. As a senior citizen with limited income, I only desire to see episode 5 as soon as I can and somehow be able to view a new season. I know it is challenging to come up with new ideas for a series, but this one is brilliantly written, performed, and educating. I encourage families to watch this series as it is very helpful to the raising of… Read more »