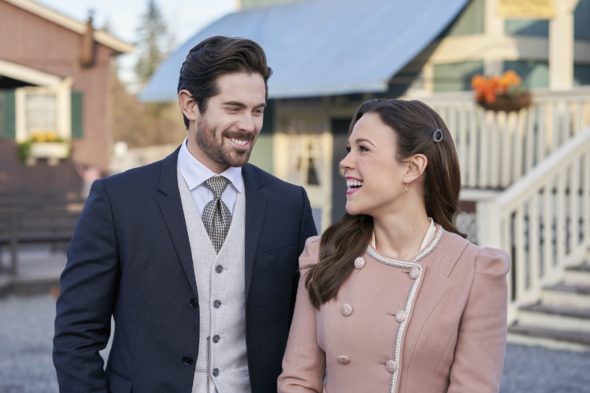 Elizabeth and the other residents of Hope Valley are returning to Hallmark. The cable channel has announced that season nine of When Calls the Heart will launch on Sunday, March 6th. There will be 12 episodes this time around.

STUDIO CITY, CA – January 5, 2022 – Season nine of Hallmark Channel’s beloved primetime drama series, “When Calls the Heart,” will make its compelling return with more romance and drama in store for the residents of Hope Valley, premiering on Sunday, March 6, 2022 at 9pm/8c with 12 all-new episodes!

Hope Valley is in a state of growth, with the foundry’s progress and the evolution of key relationships. The Mayoral race has the town buzzing with a few members of the town running against one another. Elizabeth and Lucas focus on their relationship beyond courtship, and as she gets to know Lucas better, she learns about his past which gives Elizabeth pause about their future.

“‘When Calls the Heart’ is a cherished series that continues to grow in the ratings annually. It continues to gain fans and is a tentpole of our network’s storytelling, said Lisa Hamilton Daly, Executive Vice President, Programming, Crown Media Family Networks. “We are thrilled to showcase a new season from the talented writers and amazing cast. Continuing with original stories of romance, drama and friendship, we are thrilled for viewers to tune in to the new season.”

The hit drama “When Calls the Heart” ended its eighth season on a high, with this season’s final episode (8012) ranking as the most-watched episode of the series in Households (2.9 million) and among Total Viewers (3.6 million) on a Live+3 basis. In fact, season 8 became the most watched of the series in Households, and among Total Viewers and Women 18+, with the program delivering 2.7 million Households, 3.3 million Total Viewers, and 2.4 million Women 18+. The program also ranked as the #1 original scripted series on ad-supported cable in 2021-to-date among Households and Women 18+. However, among Women 18+, the program was also this year’s #1 original series (including reality) on ad-supported cable in 2021-to-date.

With its 12 episodes, the season reached 9.5 million unduplicated Total Viewers.

What do you think? Do you enjoy watching the When Calls the Heart TV series? Are you looking forward to seeing the ninth season?

love the whole series so far, can’t wait for season 9