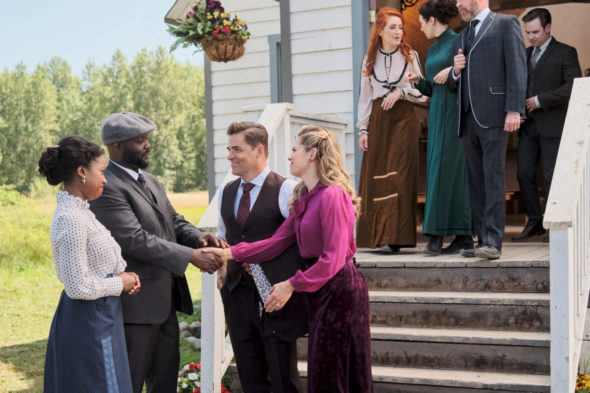 How will growth and change affect Hope Valley? Has the When Calls the Heart TV show been cancelled or renewed for a 10th season on Hallmark Channel? The television vulture is watching all the latest cancellation and renewal news, so this page is the place to track the status of When Calls the Heart, season 10. Bookmark it, or subscribe for the latest updates. Remember, the television vulture is watching your shows. Are you?

Airing on the Hallmark Channel cable channel, When Calls the Heart stars Erin Krakow, Jack Wagner, Kevin McGarry, Chris McNally, Andrea Brooks, Kavan Smith, Pascale Hutton, Ben Rosenbaum, Johannah Newmarch, Martin Cummins, Kayla Wallace, Viv Leacock, Natasha Burnett, Vienna Leacock, Elias Leacock, Hrothgar Mathews, Loretta Walsh, and Amanda Wong. Inspired by the Janette Oke novel, the TV series follows Elizabeth Thatcher (Krakow), a young teacher from a high society background. She’s assigned to teach in a coal country classroom and it’s a life-changing experience. Now a widow and single mother, Elizabeth faces new challenges but enters into a new relationship with mysterious gambler Lucas Bouchard (McNally). In season nine, Hope Valley is in a state of growth, with the foundry’s progress and the evolution of key relationships. The Mayoral race has the town buzzing with a few members of the town running against one another. Elizabeth and Lucas focus on their relationship beyond courtship, and as she gets to know Lucas better, she learns about his past which gives Elizabeth pause about their future.

The ninth season of When Calls the Heart averages a 0.15 rating in the 18-49 demographic and 2.27 million viewers. Compared to season eight, that’s down by 25% in the demo and down by 6% in viewership in the live+same day ratings (including DVR playback through 3:00 AM). While these numbers don’t include further delayed or streaming viewing, they are a very good indicator of how a show is performing, especially when compared to others on the same channel. There can be other economic factors involved in a show’s fate, but typically the higher-rated series are renewed and the lower-rated ones are cancelled. Find out how When Calls the Heart stacks up against other Hallmark Channel TV shows.

Will Hallmark Channel cancel or renew When Calls the Heart for season 10? This show remains Hallmark’s highest-rated series but it’s also been on the air for nine years. I think it will be renewed and could continue even if Krakow opts to leave at some point. The series will end some day but I don’t think that will happen just yet. I’ll update this page with breaking developments. Subscribe for free alerts on When Calls the Heart cancellation or renewal news.

What do you think? Do you hope that the When Calls the Heart TV show will be renewed for a 10th season? How would you feel if Hallmark Channel cancelled this TV series, instead?

Rumor has it that viewership dropped in the 18-49 age demographic, because they quit watching the show, due to Elizabeth choosing Lucas over Nathan. If so, this is very disappointing. I think if they cancel the show, they should run a few more episodes to tie up some loose ends, especially concerning the Mei Sou/Faith/Lucas triangle. It would be good to end the show, with some sort of “send off” or “grand finale”, so that the audience would know what is happening and be able to bid them farewell.

Love the show hope it will be renewed to continue the stories.

My daughter and I have watched this show since the beginning! We love this show and all the changes in the town is great to see! Even though my daughter is now married we both watch it and talk about it Monday! We do miss having a Christmas special episode though.. please bring that back also! We look fwd to it! Love love love the entire cast! Please bring it back for many more seasons!

I love this series. I have it taped when I can’t watch it at the time. I never miss a show. It’s so nice to have a entertaining show that has good values. This would truly be so disappointing to not have this show on anymore. I am also really hoping we don’t lose any of the stars to the new GAC station. I have been a fan since season 1. This is the only show I watch regularly.

Please don’t cancel… with Covid every thing has been effected. Miss having more of the kids. Please bring Mei back, she was a delight, perfect for Nathan. Lee and Rosemary having a baby will bring joy to the watchers.

WCTH is my favorite show. Please don’t cancel it now. I am definitely team Lucas. I hope to see he and Elizabeth marry and all the adventures ahead of them. As well as the developing relationships of a few others characters. I can’t wait for the next season!

Very good series, nice to watch a show with no sex and drugs. True to life

Love this series! I can’t wait for season 10.
My husband and I watch an episode every night.

I really hope the series is not cancelled I love the wholesomeness of the show!

I really hope it is not cancelled. I have looked forward to see every season and so are my friends along with family. Please do not canceled it.

Don’t cancel When Calls the Heart. It is a charming series with well developed characters and a good plot line. It has amazing loyal fans!! We look forward to every new season!

I FIND this show boring and i want them to cancel it . No season 10 i stopped watching and I know a lot of my friends stopped watching but a hallmark love move in its place. no feeling butterflies that was boring to.