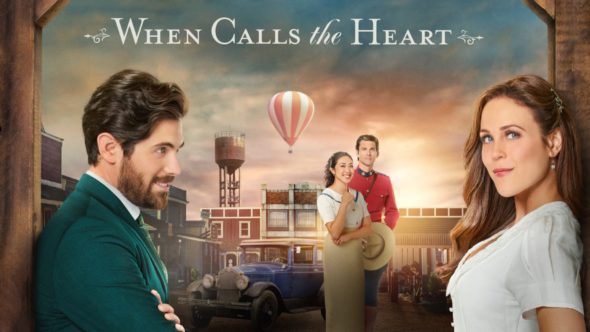 The When Calls the Heart TV series has been the highest-rated scripted series on Hallmark Channel for quite a while. However, the show is now in its ninth season and nothing can last forever. Could Hallmark be prepared to say goodbye? Will When Calls the Heart be cancelled or renewed for season 10? Stay tuned.

A romantic drama series, the When Calls the Heart TV show stars Erin Krakow, Jack Wagner, Kevin McGarry, Chris McNally, Andrea Brooks, Kavan Smith, Pascale Hutton, Ben Rosenbaum, Johannah Newmarch, Martin Cummins, Kayla Wallace, Viv Leacock, Natasha Burnett, Vienna Leacock, Elias Leacock, Hrothgar Mathews, Loretta Walsh, and Amanda Wong. Inspired by the Janette Oke novel, the TV series follows Elizabeth Thatcher (Krakow), a young teacher from a high society background. She’s assigned to teach in a coal country classroom and it’s a life-changing experience. Now a widow and single mother, Elizabeth faces new challenges but enters into a new relationship with mysterious gambler Lucas Bouchard (McNally). In season nine, Hope Valley is in a state of growth, with the foundry’s progress and the evolution of key relationships. The Mayoral race has the town buzzing with a few members of the town running against one another. Elizabeth and Lucas focus on their relationship beyond courtship, and as she gets to know Lucas better, she learns about his past which gives Elizabeth pause about their future.

For comparisons: Season eight of When Calls the Heart on Hallmark Channel averaged a 0.19 rating in the 18-49 demographic and 241,000 viewers.

What do you think? Do you like the When Calls the Heart TV series on Hallmark Channel? Should it be cancelled or renewed for a 10th season?

I find it very interesting that the Season Finale aired today and compared to last year I am struggling to find any articles about the ending. No debriefs. Breakdowns. Online commentary outside of social media.
Then to top it off no announcement of Season 10 which normally happens immediately after the show airs.
It’s hard not to think that tonight was a series finale not a season finale.

11 Episodes down, and literally no major progress on the story. Ending the story with Rosemary & Lee getting pregnant means all first 10episodes of their characters were wasted. Nor does Nathan’s, or L&E’s story has gone anywhere than what it was at the end of S9. Seeing Bill Avery getting sick was worse of all. He is one of the best characters and actor of the show.
Wasting 10 Episodes and ending the season with something for next season is a mockery on the audience

Cancel this. WCTH needs to end with season 9

Please don’t cancel, yes it changed but with Covid much has… Love to see more of the kids next season. Hope Mei comes back, she was a delight.

Love the show. Only decent show on tv. Actors are great. The chemistry between L & E has gotten much better in season 9. Can’t wait for next episodes. A good clean show, no foul language and no sex scenes. A good family show. We need more of these.

After the disaster of Season 8, I hesitantly came back for Season 9 but sadly only lasted 4 episodes. Tonight I came back, willing to give it another go for an episode or 2 and didn’t even make it through Episode 5 before I switched to another show. While I am happy others are enjoying the season, for me it’s not the same show. It lacks the heart and soul, the essence of what made it enjoyable to watch in the first place. It’s a shame because once upon a time this was one of of my weekly go to… Read more »

This is the best show currently on tv! Love the whole cast!

I no longer watch this series so it doesn’t matter to me.

This has been the best season ever! All the different characters are fully grown now and doing great in hope Valley!. The Elizabeth and Lucas storyline with Nathan as a friend is wonderful, rosemary and Lee are wonderful the addition of the canfields have made it a real nice community. And I love the new chemistry between hickam and faith. I hope this shows up And gets renewed for season 10 for sure! All these naysayers and people who say they “can’t stand the show anymore” are just mad because Nathan didn’t get chosen, Lucas did. Nathan will have his… Read more »

No plot – just everyone telling each other how wonderful they are. Where’s the story and tension – real life stories (I know it’s Hallmark) but no meaningful dialogue like in the early seasons. Scripts are very weak.

If it was me – Id have Elizabeth having issues with Lucas so she seeks out Nathan— etc ….

Cancel the show. It has gotten too far away from the book. It has went from anticipating the next show to being so boring that it’s “who cares” if I watch it.

Are there new writers because the show lost its heart and it is no longer good. Elizabeth is no longer likeable. She used to be sweet and turned away from her rich beginnings and was caring and wholesome. She now seems more ruthless maybe to be more like her new boyfriend. In past years I could not wait to watch the show and now I find I have lost interest. It doesn’t have the same wholesome spirit.

Unfortunately I am more than disappointed with WCTH ‘s season 10. The Lucas/Elizabeth chemistry is lacking. Elizabeth swoons too easily and Lucas appears to be going through the motions. While I don’t want it cancelled because many are still invested in the show. I, however, don’t intend to keep watching.

Season 9 E 4 just started in the USA, frankly without Jack, I’m finding it boring. I can’t imagine 2 cute guys both vying for Elizabeth’s affection. Just seems like, been there,done that, bring love and Ronan e and honesty into this show. Not everyone like Ms Thornton comes from a RICH fam.!!

I agree it seems the writing has changed! The dialogue and story lines have lost their depth and themes and changes in town seem forced. The original writing seemed to weave change into the story with skill. Bring back the original writing style! That is what made the show great!