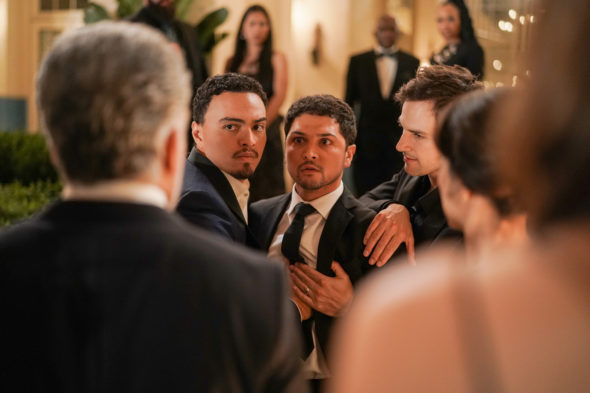 Who will be left standing in the first season of the Promised Land TV show on ABC? As we all know, the Nielsen ratings typically play a big role in determining whether a TV show like Promised Land is cancelled or renewed for season two. Unfortunately, most of us do not live in Nielsen households. Because many viewers feel frustrated when their viewing habits and opinions aren’t considered, we invite you to rate all of the first season episodes of Promised Land here.  *Status Update Below.

An ABC family drama series, the Promised Land TV show stars John Ortiz, Cecilia Suárez, Augusto Aguilera, Christina Ochoa, Mariel Molino, Tonatiuh Elizarraraz, Andres Velez, Katya Martín, Rolando Chusan, and Bellamy Young. Yul Vazquez, Julio Macias, Ariana Guerra, Kerri Medders, Tom Amandes, Natalia del Riego, and Miguel Angel Garcia recur. The story revolves around two Latinx families vying for wealth and power in California’s Sonoma Valley. Joe Sandoval (Ortiz) is the patriarch of his family who took a small vineyard owned by a former rival and turned it into a wine and beverage empire, Heritage Vineyard. Along the way, he alienated many — including members of his own family. More than just a savvy corporate fighter, Joe can do every job there is to do on a vineyard, but finds himself at a crossroads when an enemy from his past resurfaces. His wife, Lettie (Suarez), will do anything to keep her family intact, despite all its fraying allegiances. Their children are highly capable Veronica (Ochoa), estranged Antonio (Tonatiuh), party-girl Carmen (Molino), erratic Junior (Garcia), and stepson Mateo (Aguilera), the hardworking and highly capable general manager of the vineyard. Meanwhile, immigrants Carlos (Velez), Billy (Chusan), Juana (Martin), and Rosa (Guerra) cross the Mexican border in search of a better life.

What do you think? Which season one episodes of the Promised Land TV series do you rate as wonderful, terrible, or somewhere between? Do you think that Promised Land should be cancelled or renewed for a second season on ABC? Don’t forget to vote, and share your thoughts, below.

Absolutely loved Promised Land!! All the characters were so interesting and dynamic, couldn’t wait for the next episode!!

BIG MISTAKE to cancel Promised Land!!! ABC finally gets a series with a great storyline and terrific acting, and you cancel it? What are you thinking? Keep the bad stuff on and cancel the quality. I think you need to evaluate the executives that make these poor decisions.

I agree with everything you said because it is different and shows the struggle of the immigrants.

I love Promise Land !! Please bring it back for season 2.

I loved the show and hate that it was cancelled. I want it back.

I enjoyed the show and am disappointed it is canceled. I feel like I wasted my time. Hope Big Sky continues.

Too confusing with the subtitles and it’s hard to follow the story line.

Hmm only seen one I my area , seems like a good show, maybe….

I was so excited for this show. But their was too much Spanish speaking, therefore subtitles to read. Which I hate. Overall, I did like it. My favorite character is Bellamy Youngs character. I loved the actress on Scandal. Time will tell on this one.