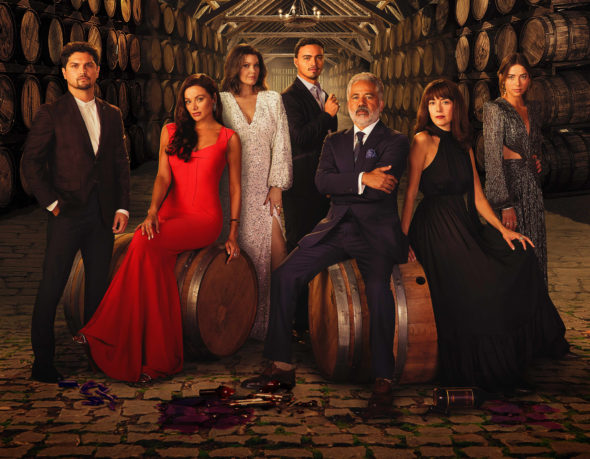 Joe Sandoval (Ortiz) is the patriarch of the family who took a small vineyard owned by a former rival and turned it into a wine and beverage empire, Heritage Vineyard. Along the way, he alienated many — including members of his own family. More than just a savvy corporate fighter, Joe can do every job there is to do on a vineyard, but finds himself at a crossroads when an enemy from his past resurfaces.

Joe’s wife, Lettie (Suarez), will do anything to keep her family intact despite all its fraying allegiances. She is proud of the fortune the Sandovals have built, but the arrival of a figure from Lettie’s past soon causes her to question whether the cost of achieving the American Dream is too high.

Veronica (Ochoa) is the eldest Sandoval daughter. She’s the highly capable heir to the Heritage Wines empire, and her father’s trusted Number Two. Her drive and ambition have left her with some glaring personal blind spots, and Veronica’s seemingly perfect life soon starts to unravel.

Estranged son Antonio (Tonatiuh) has been living in New York after being exiled by his father Joe. He’s called back into the fold when the family faces a threat from the outside. Whether Antonio has forgiven or forgotten the treatment he received from his family remains to be seen.

Youngest daughter Carmen (Molino) has a flirtatious, party-girl attitude that masks a deeply flawed young woman. She craves the achievements of her other siblings but has no idea how to attain them. No one expects anything from Camila and that makes her dangerous.

The youngest son, Junior (Garcia), is the most erratic of the children. His siblings think he can be trusted with little responsibility, but his father still holds out hope and a special affection for his troubled son.

Mateo (Aguilera) is the hardworking and highly capable general manager of the Heritage Vineyard. However, as the stepson of Joe, he has never felt fully accepted by the rest of the wealthy family. Mateo finds himself at a crossroads when a young immigrant who reminds him of his roots arrives to work in the Sandoval household.

Carlos (Velez) is a young immigrant who comes to the Heritage Vineyard in search of a better life. On his way there, he meets Juana (Martin), a young woman who dreams of becoming a teacher. Carlos’ brother, Billy (Chusan), is also a worker and he dreams of one day owning the vineyard. He has an immediate spark with Juana, launching an intense rivalry between the brothers.

Margaret Honeycroft (Young) is a hotel magnate and the longtime nemesis of Joe Sandoval.

What do you think? Do you like the Promised Land TV show? Do you think it should have been cancelled or renewed for a second season?

I thoroughly enjoyed this show and would like to see more instead of all the reality shows.

I absolutely LOVE this show! It’s the one show I look forward to watching the most and I hope they put out another season!!

Loved this series. Had so many twists and turns. Please bring it back.

Please don’t cancel-the plot is growing and the characters are real people-give it a second season!

Oh no it was a good show please bring it back!!

Loved promised land- sad it was not renewed

This show is pretty good BUT in this day and age people don’t want to read subtitles and there are toooooo many. Not everyone speaks spanish so following the subs you lose the jist of the story and facial expressions that tell so much

Loved this show! Bring it back!

I love this show little bit of mystery blended with a love quarrel & family drama…what’s not to love?!

I love this show! Bring it back!