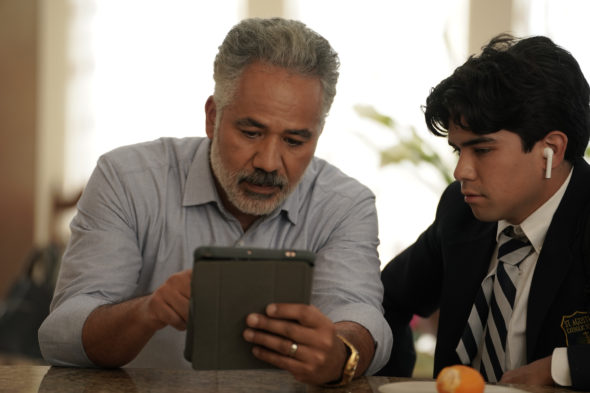 It doesn’t look like the Sandoval family’s troubles will have a second season. ABC is dropping the Promised Land TV series after next week’s fifth episode. The Good Doctor will return to its Monday night timeslot on February 28th, weeks earlier than planned.

A family drama series, the Promised Land TV show stars John Ortiz, Cecilia Suárez, Augusto Aguilera, Christina Ochoa, Mariel Molino, Tonatiuh Elizarraraz, Andres Velez, Katya Martín, Rolando Chusan, and Bellamy Young. Yul Vazquez, Julio Macias, Ariana Guerra, Kerri Medders, Tom Amandes, Natalia del Riego, and Miguel Angel Garcia recur. The story revolves around two Latinx families vying for wealth and power in California’s Sonoma Valley. Joe Sandoval (Ortiz) is the patriarch of his family who took a small vineyard owned by a former rival and turned it into a wine and beverage empire, Heritage Vineyard. Along the way, he alienated many — including members of his own family. More than just a savvy corporate fighter, Joe can do every job there is to do on a vineyard, but finds himself at a crossroads when an enemy from his past resurfaces. His wife, Lettie (Suarez), will do anything to keep her family intact, despite all its fraying allegiances. Their children are highly capable Veronica (Ochoa), estranged Antonio (Tonatiuh), party-girl Carmen (Molino), erratic Junior (Garcia), and stepson Mateo (Aguilera), the hardworking and highly capable general manager of the vineyard. Meanwhile, immigrants Carlos (Velez), Billy (Chusan), Juana (Martin), and Rosa (Guerra) cross the Mexican border in search of a better life.

The first season of Promised Land averages a 0.19 rating in the 18-49 demographic and 1.72 million viewers in the live+same day ratings (including DVR playback through 3:00 AM).  It’s ABC’s lowest-rated scripted series of the season and last night’s episode hit a new low with a 0.15 demo and 1.54 million. While the show does pick up viewers in the delayed viewing, the drama continues to be a very low-rated show.

Production on the show’s 10-episode season will be completed and the remaining episodes will be released each week on Hulu. Episode six will be released on Hulu on March 1st. As to the chances of a second season, Deadline lists the series as cancelled.

“Promised Land is a beautifully executed and tremendously entertaining series of which everyone at our company is extremely proud,” an ABC rep said in a statement to TVLine. “We know it has a passionate audience that is very invested in this show, and those viewers will be able to stream all subsequent episodes exclusively on Hulu every Tuesday for the rest of the season.”

What do you think? Have you watched the Promised Land TV show on ABC? Do you wish that this series would have been renewed for a second season?

a “Dallas” style show staged in California wine country with the timely subject of border crossings and intrigue and murder..Loved the series, sorry it is gone

I loved Promises Land. Very disappointed it was cancelled!

I loved “The Promised Land”!