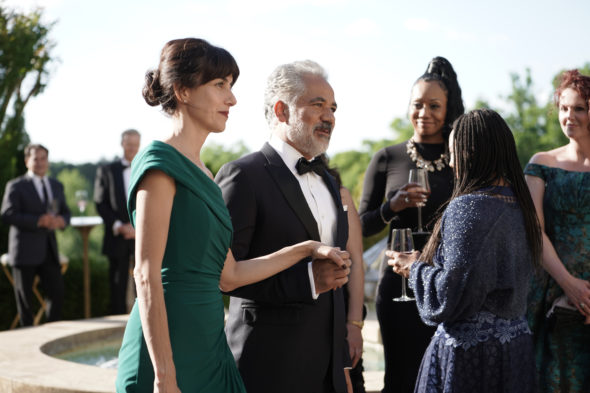 Which family member has the biggest secret? Has the Promised Land TV show been cancelled or renewed for a second season on ABC? The television vulture is watching all the latest cancellation and renewal news, so this page is the place to track the status of Promised Land, season two. Bookmark it, or subscribe for the latest updates. Remember, the television vulture is watching your shows. Are you?

Airing on the ABC television network, the Promised Land TV show stars John Ortiz, Cecilia Suárez, Augusto Aguilera, Christina Ochoa, Mariel Molino, Tonatiuh Elizarraraz, Andres Velez, Katya Martín, Rolando Chusan, and Bellamy Young. Yul Vazquez, Julio Macias, Ariana Guerra, Kerri Medders, Tom Amandes, Natalia del Riego, and Miguel Angel Garcia recur. The story revolves around two Latinx families vying for wealth and power in California’s Sonoma Valley. Joe Sandoval (Ortiz) is the patriarch of his family who took a small vineyard owned by a former rival and turned it into a wine and beverage empire, Heritage Vineyard. Along the way, he alienated many — including members of his own family. More than just a savvy corporate fighter, Joe can do every job there is to do on a vineyard, but finds himself at a crossroads when an enemy from his past resurfaces. His wife, Lettie (Suarez), will do anything to keep her family intact, despite all its fraying allegiances. Their children are highly capable Veronica (Ochoa), estranged Antonio (Tonatiuh), party-girl Carmen (Molino), erratic Junior (Garcia), and stepson Mateo (Aguilera), the hardworking and highly capable general manager of the vineyard. Meanwhile, immigrants Carlos (Velez), Billy (Chusan), Juana (Martin), and Rosa (Guerra) cross the Mexican border in search of a better life.

The first five episodes of the first season of Promised Land averaged a 0.19 rating in the 18-49 demographic and 1.69 million viewers in the live+same day ratings (including DVR playback through 3:00 AM). While these numbers don’t include further delayed or streaming viewing, they are a very good indicator of how a show is performing, especially when compared to others on the same channel. There can be other economic factors involved in a show’s fate, but typically the higher-rated series are renewed and the lower-rated ones are cancelled. Find out how Promised Land stacks up against other ABC TV shows.

Will ABC cancel or renew Promised Land for season two? The network has done well with soapy dramas about powerful families in the past though none have featured a Latinx cast. The early ratings are quite low but I think ABC will be patient and give this show every chance to succeed.  I’ll update this page with breaking developments. Subscribe for free alerts on Promised Land cancellation or renewal news.

What do you think? Were you hoping that the Promised Land TV show would be renewed for a second season? Are you sorry that ABC cancelled this TV series, instead?

Please stop canceling excellent shows. I love Promised Land and when my DVR stopped recording at episode 5, I said here we go again. I’ll head over to Hulu to watch the remaining episodes and hope for season 2.

I loved this show. Even my husband loved it. We watch very few shows together and it was so happy we could watch this one together. We looked forward to watching this show.

Excellent show, why in the world would you cancel? All characters were SO interesting and dynamic. I looked so forward to each episode, loved Promised Land as did many of my friends!! Bring it back!!

How do you keep other shows on air such as Dancing with the Stars and cancel shows like Promised Land and Grand Hotel? 2 terrific shows. So disappointed.

Please bring back Promised Land!! I love this show! I can’t believe it has been canceled! It really is a good show!

I am loving this show and can’t believe they canceled it. The acting and storyline are great. The storyline kept my interest, characters are involved and complicated. Great drama which is unlike all the other dramas out there. I hope another station pick it up. It’s worth it.

WOW, ABC, just wow. The Promised Land was a really good show. So disappointing for it to be cancelled, even more so in the middle of the series.
It kept your interest for more drama, way more then the “Good Doctor”, or even the same ole “Bachelor Nation. I was so shocked when I learned it was cancelled. Please bring it back!!!

I loved Promised Land. I am shocked that ABC cancelled it. It was an awesome show. Please bring it back!

This show was so great and I was so thirsty for more action and drama . It was awesome! I am saddened that it was canceled. Makes no sence finally a tele novela in English and Spanish but just like Latino Chanel tele Novela it showed promise for excitement and mystery!! Such a bad call to cancel!!

Very disappointed in ABC for cancelling show Promised Land in middle of series. ABC keeps trash shows but because this show is about minorities they do not even give it a chance.

I’ve noticed that shows representing brown people are cancelled within a season. There was an indian show called Beechum’s House that was cancelled and mainly revolved around indian people. This is seriously crap. I loved this show and hate that its cancelled.

I am so very disappointed Promised Land is canceled and I cannot see remaining episodes. This is not fair to the viewers that loved this show.

I love the show. Great story line and leaves me looking forward to the next episode. Will be very disipointed if they don’t renew this great show.

I was very surprised when I heard Promised Land was cancelled. I loved the show & other people liked it to. Very disappointed.