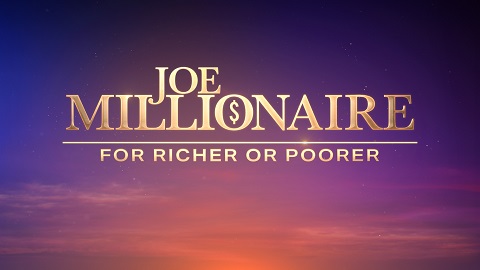 Joe Millionaire is coming back to FOX after 18 years, but there is a new twist for the reality dating series. This time around, there will be two single men looking for love. Only one will be a real millionaire and the ladies won’t know which one. The new Joe Millionaire: For Richer or Poorer series will arrive in January 2022.

FOX revealed more about the dating series in a press release.

“FOX is putting a fresh twist on one of the most watched dating shows in reality history with JOE MILLIONAIRE: FOR RICHER OR POORER, it was announced today by Rob Wade, President, Alternative Entertainment & Specials, FOX Entertainment. From FOX Alternative Entertainment and produced by SallyAnn Salsano of 495 Productions (Jersey Shore, Paradise Hotel, Peace of Mind with Taraji), JOE MILLIONAIRE: FOR RICHER OR POORER is a new take on the original JOE MILLIONAIRE dating series that took the world by storm in 2003. The new series features two incredible single men… with one HUGE difference. One’s a millionaire, and the other is definitely NOT. The series is set to debut January 2022 on FOX.

“This revival of JOE MILLIONAIRE represents a potent combination: one of the most innovative and popular dating shows of all time with SallyAnn Salsano, who ranks among the most fearless producers in the business,” said Wade. “I’ve long admired JOE MILLIONAIRE for its daring premise, and since the moment I joined FOX, I’ve wanted to bring it back in the spotlight in a whole new way for both new viewers and fans of the original.”

A twist on the original unscripted FOX dating series that turned reality television on its head, JOE MILLIONAIRE: FOR RICHER OR POORER will feature two single men – one is a millionaire, and the other is an “average Joe” with little to his name. Twenty women will date both of them, but they will have no idea which Joe is rich. As love connections are made and each guy finds his perfect match, the women must ask themselves what is more important… Love or Money?

Check out a preview for the new dating series below.

What do you think? Are you excited to see Joe Millionaire: For Richer or Poorer on FOX?