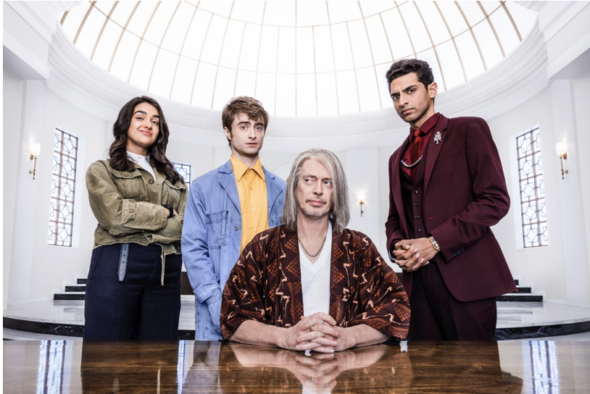 Ready to go back in time? TBS has renewed the Miracle Workers TV show for a second season. Season two of this anthology comedy series will take place in medieval times and series regulars Daniel Radcliffe, Steve Buscemi, Geraldine Viswanathan, and Karan Soni will return in new roles.

Here’s more information about the renewal:

Created by Simon Rich and Executive Produced by Lorne Michaels

NEW YORK, MAY 15, 2019 – Prayers answered! On the heels of launching the #1 new cable comedy this season, TBS has ordered a second installment of Miracle Workers, the anthology series created by Simon Rich and executive produced by Lorne Michaels. The series has reached a multiplatform audience of 26.4 million viewers across all TBS platforms.

“I’m so grateful to have been given the opportunity to bring my novel What in God’s Name to life in season one,” says Rich. “And now that I’ve bled that sucker dry, I’m really excited to tell a brand-new story with the same group of brilliant actors.”

Season two of Miracle Workers will be a medieval story about friendship, family and trying not to be murdered. Centered on a group of villagers in the dark ages trying to stay positive in an age of inequality and fake news, this installment will feature series regulars Daniel Radcliffe, Steve Buscemi, Geraldine Viswanathan, and Karan Soni returning in new roles and facing new challenges. “Was there ever better casting?” asks the Los Angeles Times.

“Simon’s absurdist and comedic tales of human existence are truly unique,” said Thom Hinkle, executive vice president of original programming for TBS, “He pitched us what he wants to explore in the dark ages with these brilliant actors and it’s weird and smart and perfect.”

Miracle Workers is created by Man Seeking Woman creator Simon Rich. It is executive produced by Lorne Michaels, Andrew Singer and Katy Jensen of Michaels’ Broadway Video, along with Rich, Radcliffe and Buscemi.

What do you think? Did you watch the first season of Miracle Workers on TBS? Are you glad that the series has been renewed for a second season?

My favorite new program! So glad it was renewed. When is it slated to begin?

I thought the show was really cute. It was a silly show. But I liked it and I’m glad it was renewed.

YES! This is a really original idea, a quirky comedy, and incredible cast with brilliant acting! PLEASE don’t change them! I am so excited for Season 2! THANK YOU!

And those of us in the, ahem, older demographics love it, too!!!!

What about doing the ‘multiverse’ angle?? If Spiderman can do it, CERTAINLY God can!

I really love the first season of Miracle Workers. The episodes were very funny and good to watch. I’m glad that it will come back for the 2nd season.