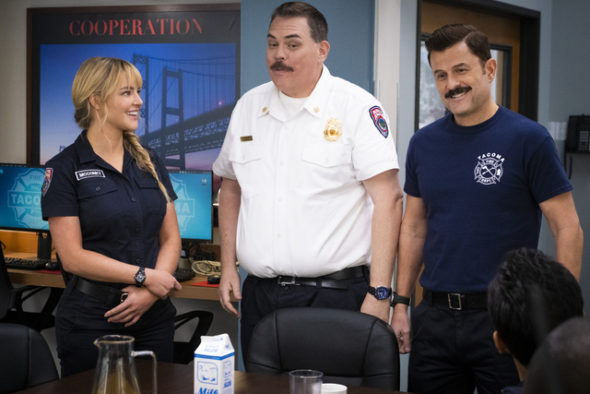 The crew of Station 24 will keep coming up with new shenanigans. truTV has renewed the Tacoma FD TV show for a fourth season. It will debut at some point in 2022.

A workplace comedy series, Tacoma FD stars co-creators Kevin Heffernan and Steve Lemme, with Eugene Cordero, Marcus Henderson, Gabriel Hogan, and Hassie Harrison. The sitcom unfolds in a firehouse in one of the rainiest cities in the USA — Tacoma, Washington. These firefighters keep themselves entertained with creative competitions, friendly first responder rivalries, and no shortage of bizarre emergency calls.

Airing on Thursday nights, the third season of Tacoma FD averages a 0.10 rating in the 18-49 demographic and 241,000 viewers in the live+same day ratings (includes all DVR playback through 3:00 AM). Compared to season two, that’s down by 28% in the demo and down by 13% in viewership. While these numbers don’t include further delayed or streaming viewing, they are a very good indicator of how a show is performing, especially when compared to others on the same channel.

According to TBS, season three of Tacoma FD has become one of the most DVR’d cable comedies in 2021.  It ranks as a top 10 cable comedy and has reached nearly four million viewers to date. There are six episodes remaining in the third season.

It was also announced today that Miracle Workers, which airs on sister channel TBS, has been renewed for a fourth season. Here’s a joint statement about the renewals from Adrienne O’Riain and Sam Linsky, Co-Heads of Scripted Programming, TBS, TNT, truTV. They said, “Miracle Workers and Tacoma FD never fail to deliver good times, good laughs, and passionate fans. We love the unique sensibility and distinctive, bold comedy of these shows. The fact that they continue to resonate so strongly with audiences speaks to the dedication of their creators and their brilliant network executives.”

Check out our status sheets to track new TV series pickups, renewals, and cancellations. You can find lists of cancelled shows here.
What do you think? Have you enjoyed the Tacoma FD TV series on truTV? Are you glad to hear that this comedy has been renewed for a fourth season?