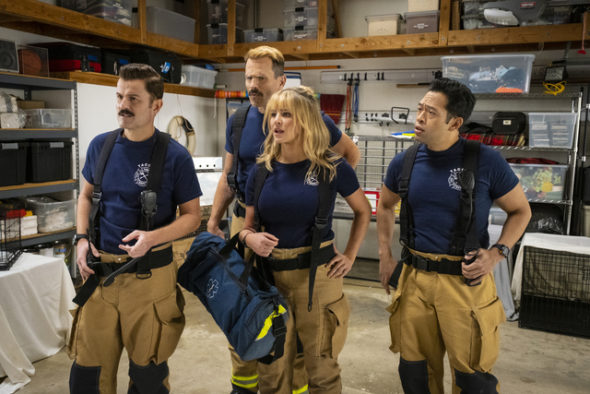 How will the crew fill their time this year? Has the Tacoma FD TV show been cancelled or renewed for a fourth season on truTV? The television vulture is watching all the latest cancellation and renewal news, so this page is the place to track the status of Tacoma FD, season four. Bookmark it, or subscribe for the latest updates. Remember, the television vulture is watching your shows. Are you?

Airing on the truTV cable channel, the Tacoma FD TV show stars co-creators Kevin Heffernan and Steve Lemme, with Eugene Cordero, Marcus Henderson, Gabriel Hogan, and Hassie Harrison. The sitcom unfolds in a firehouse in one of the rainiest cities in the USA — Tacoma, Washington. These firefighters keep themselves entertained with creative competitions, friendly first responder rivalries, and no shortage of bizarre emergency calls.

The third season of Tacoma FD averaged a 0.09 rating in the 18-49 demographic and 220,000 viewers in the live+same day ratings (includes all DVR playback through 3:00 AM). Compared to season two, that’s down by 36% in the demo and down by 20% in viewership. While these numbers don’t include further delayed or streaming viewing, they are a very good indicator of how a show is performing, especially when compared to others on the same channel. There can be other economic factors involved in a show’s fate, but the higher-rated series are usually renewed and the lower-rated ones are cancelled. Find out how Tacoma FD stacks up against other truTV TV shows.

Will truTV cancel or renew Tacoma FD for season four? The cable channel doesn’t have many scripted programs and Tacoma FD performed very well in season two. I suspect the crew will be back for a third season. I’ll update this page with breaking developments. Subscribe for free alerts on Tacoma FD cancellation or renewal news.

What do you think? Are you glad that the Tacoma FD TV show has been renewed for a fourth season? How would you feel if truTV had cancelled this TV series, instead?