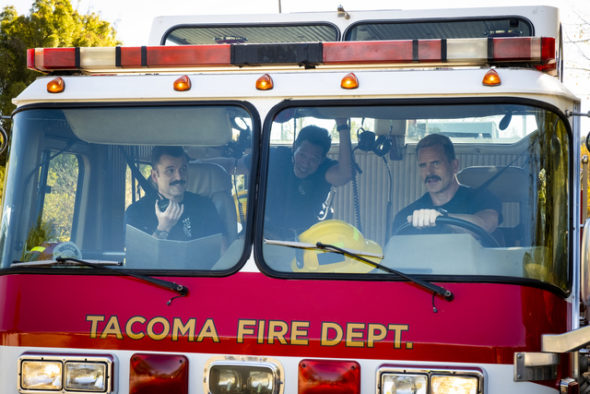 What will be the strangest calls in the third season of the Tacoma FD TV show on truTV? As we all know, the Nielsen ratings typically play a big role in determining whether a series like Tacoma FD is cancelled or renewed for season four. Unfortunately, most of us do not live in Nielsen households. Because many viewers feel frustrated when their viewing habits and opinions aren’t considered, we invite you to rate all of the third season episodes of Tacoma FD here.  *Status Update Below.

A truTV workplace comedy, Tacoma FD stars co-creators Kevin Heffernan and Steve Lemme, with Eugene Cordero, Marcus Henderson, Gabriel Hogan, and Hassie Harrison. The sitcom unfolds in a firehouse in one of the rainiest cities in the USA — Tacoma, Washington. These firefighters keep themselves entertained with creative competitions, friendly first responder rivalries, and no shortage of bizarre emergency calls.

What do you think? Which season three episodes of the Tacoma FD TV series do you rate as wonderful, terrible, or somewhere between? Do you think that Tacoma FD should be cancelled or renewed for a fourth season on truTV? Don’t forget to vote, and share your thoughts, below.

great show, funny, ,and glad its been renewed for a 4th season..hopefully it goes on to 8 seasons at least

Love that the gang is back, the wait has been unbearable. These guys are the ONLY show that I watch on a weekly basis. How about the after show ????

This may be the funniest thing on tv. Other than the Miracle Workers series’ on TBS nothing comes close recently.

love this show, glad its finally back. hope it gets renewed for 5 more seasons at least