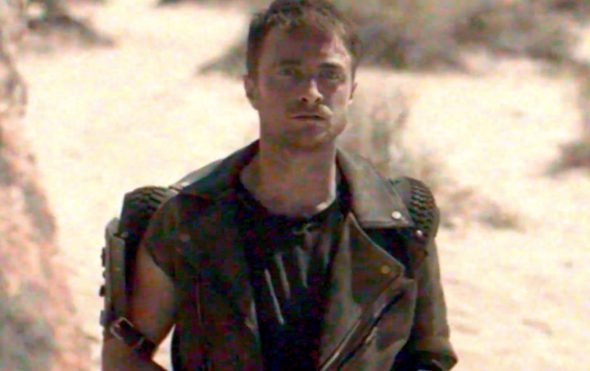 Miracle Workers has a premiere date for its fourth season. The comedy anthology series will return to TBS on January 16th. The new season, titled Miracle Workers: End Times, will be set in a post-apocalyptic future. Daniel Radcliffe, Steve Buscemi, Geraldine Viswanathan, Karan Soni, and Jon Bass star in the anthology series, which is set in a different time era every season.

In a post-apocalyptic future, a wasteland warrior (Daniel Radcliffe) and a ruthless warlord (Geraldine Viswanathan) face the most dystopian nightmare of all: settling down in the suburbs. Together they navigate the existential horrors of married life and small-town living, all under the dubious guidance of a wealthy junk trader (Steve Buscemi). Also starring Jon Bass as the couple’s faithful war dog, and Karan Soni as a kill-bot who loves to party. Guest stars this season include, Quinta Brunson (“Abbott Elementary”), Garcelle Beauvais (“Real Housewives of Beverly Hills”), Kyle Mooney (“Saturday Night Live”), Ego Nwodim (“Saturday Night Live”), Lolly Adefope (“Shrill”), Paul F. Tompkins (“HouseBroken”) and Lisa Loeb (“Robot Chicken”).

Check out a preview of Miracle Workers season four below.

What do you think? Are you excited about the return of Miracle Workers on TBS? Do you have a favorite season so far?

the show is hilarious!

It is funny, but way too many episodes per season, and the writing quality drops off after about six episodes.

knowing TBS this is probably it for the show. That’s if they don’t change their minds and cancel it the day it would premiere