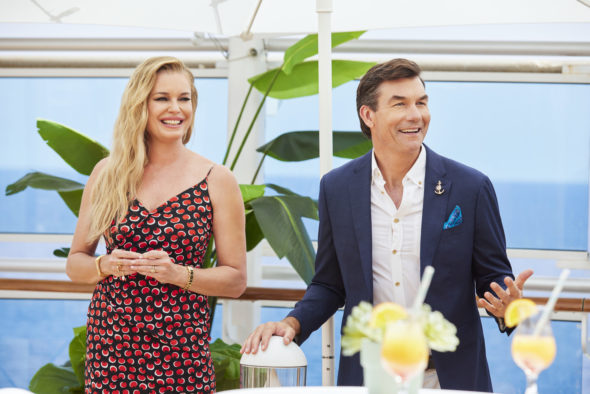 The Real Love Boat is sailing to be an exclusively streaming series. The low-rated reality series is moving from the CBS network to the Paramount+ streaming service. The fifth episode of the series will be released on the streaming service on November 2nd. Rebecca Romijn and Jerry O’Connell host the dating competition series, which was inspired by the classic ABC comedy, The Love Boat.

Deadline revealed the following about the move:

The Real Love Boat, which is a reality take on the classic CBS romantic comedy series, launched on October 5 with 2.4M viewers and a 0.3. This was in line with the overnight performance of ABC’s The Rookie: Feds, but was down on long-running hit Survivor, which brought in 4.8M viewers and a 0.7 in the earlier slot on CBS. It has slipped to below 2M overnight viewers for its subsequent three episodes.

Other series to make the move from CBS to Paramount+ in the past include SEAL Team and Evil. It’s unclear if Real Love Boat will be cancelled or if it will continue beyond the current first season.

The Amazing Race will shift to Wednesdays at 9 PM on CBS, and reruns will fill the 10 PM timeslot for the immediate future.

What do you think? Will you continue to watch The Real Love Boat on Paramount+ starting next week? Do you think that it should be cancelled or renewed for a second season the streaming service?

Glad to hear the love boat is off the normal television was not impressed with it it was like watching a version of bachelor Paradise. Loved the original love boat would be more interested in seeing that come back.

Dumb idea from the beginning. Not even worth bringing it down here to Hell to torment the damned with it.

Will not be missed

Never should have made it to any screen, lame idea from the get go.

It needed cancelled when the concept was throw out there. Stop trying to not pay writers to create shows.

You didn’t need to have psychic abilities to see that this was going to bomb. Just the words “The Real Love Boat” together just make me roll my eyes.