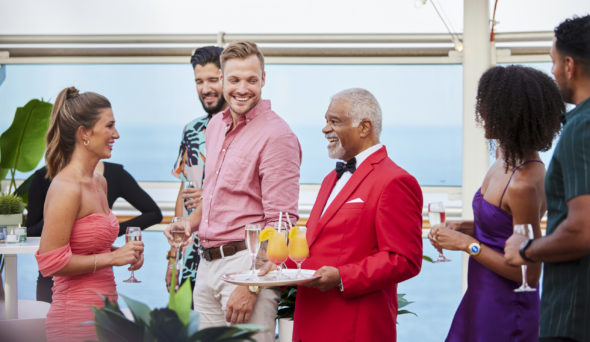 A CBS romance reality series, The Real Love Boat TV show is inspired by the 1977-86 scripted comedy-drama series The Love Boat. It’s hosted by spouses Rebecca Romijn and Jerry O’Connell. This new series brings singles together as they look for love on a real ship, the Regal Princess, and cruise through the Mediterranean. Couples’ compatibility and chemistry are tested by destination dates, challenges, and the addition of new singles. As in the scripted series, members of the crew play pivotal roles in the matchmaking and navigation of the romantic (and sometimes turbulent) waters ahead. They include the captain (Captain Paolo Arrigo), cruise director (Matt Mitcham), and bartender (Ezra Freeman). After nearly a month at sea, only one winning couple will dock in the final port and take home a cash prize as well as a once-in-a-lifetime trip courtesy of Princess Cruises.

Cancel this lame show and put Amazing Race back on in its original timeslot. No more stupid dating shows!!!!

I thought the show was OK & always love Rebecca & Jerry but it was kind of a copycat copying other dating shows & that twitters me, so please cancel this show & stop copying shows please CBS & other stations, leave the Bachelor franchise & Love Island alone could you? And viewers hope you respect my opinion & understand how it feels watching something like that being copied again. But everyone deserves love is all I can say America.

Too many reality shows already. This one is no better or worse than the ‘save money’ experiment all networks are trying to foster on the public.

I lasted about 5 minutes and shut it off and deleted from my VCR. Terrible show.

Just awful! Don’t we have enough trash on tv now without adding this train wreck into the mix? Come on CBS, get rid of this clinker asap!