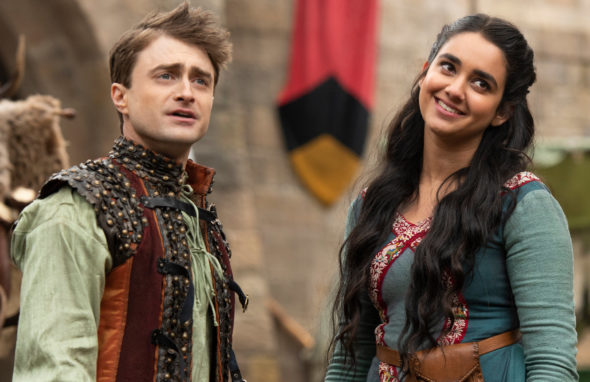 It’s a miracle! TBS just announced they’ve ordered a third season of the Miracle Workers TV show. The new season will find the cast in 1844 and the Old West.

Season two of Miracle Workers averaged a 0.29 rating in the 18-49 demo and 901,000 viewers, making it one of TBS‘ highest-rated current original series.

Here’s the TBS release about the renewal, as well as a teaser:

MIRACLE WORKERS debuted in 2018 as the #1 new cable comedy of the season. Hailed by Awards Daily as a “welcome cure for the winter blues,” the second and most recent installment MIRACLE WORKERS: DARK AGES currently ranks as a top five cable comedy, reaching 27.5 million viewers across TBS’ linear and digital platforms.

Set in the year 1844, the new season of MIRACLE WORKERS will follow an idealistic small-town preacher (Radcliffe) who teams up with a wanted outlaw (Buscemi) and a liberated prairie wife (Viswanathan) to lead a wagon train west on the Oregon Trail across an American landscape which, much like today, is fraught with both promise and peril.

“MIRACLE WORKERS is a perfect example of the fun, escapist humor that we take pride in delivering to our viewers,” said Sam Linsky and Adrienne O’Riain, co-heads of scripted original programming for TBS, TNT and truTV. “We can’t wait to see how this incredibly dynamic cast and talented group of storytellers hilariously rewrite 19th century history.”

“Getting to tell an entirely new story with this ludicrously talented cast each season is a dream come true,” said Mirk and Padnick. “We could not be happier that TBS has given us the reins on this unique and special show.”

Mirk started his career in comedy as staff writer for The Onion. He has since gone on to write for FXX’s “Man Seeking Woman” and Hulu’s “Future Man.” Mirk was a writer and producer on the first two seasons of MIRACLE WORKERS.

Padnick attended Harvard, where he was president of the Harvard Lampoon. He has written on NBC’s “The Office,” FXX’s “Man Seeking Woman,” NBC’s “Great News,” and Netflix’s “Big Mouth.” He was also a writer on the first two seasons of “MIRACLE WORKERS.” Currently, Padnick serves as an executive producer on TBS’ upcoming comedy “Chad.”

About TBS
TBS, a WarnerMedia brand, is a top-rated destination for television among young adults and known for escapist, lean-back entertainment, featuring smart, imaginative stories with heart and comedic edge. From scripted comedy series to late-night shows, game shows, and animated programming, TBS’ Originals slate is comprised of some of the most popular shows on cable — “Miracle Workers,” “CONAN,” “Full Frontal with Samantha Bee,” “The Last O.G.” and “American Dad!,” as well as the upcoming comedy “Chad.” The network’s slate of premium unscripted series includes the popular game show “The Misery Index,” upcoming reality-competition series “Go-Big Show” and “The Cube” and the revival of fan-favorite “Wipeout.” TBS’ lineup also includes comedy hits like “Family Guy” and “The Big Bang Theory,” classic sitcom favorites “Friends” and “Seinfeld,” blockbuster movies, and live event coverage of Major League Baseball, the NCAA Division I Men’s Basketball Championship and “ELEAGUE,” WarnerMedia’s eSports gaming competition. Viewers can watch shows on the TBS app, available for iOS, Android, Xbox One and other platforms and devices. Website: www.tbs.com

About WarnerMedia
WarnerMedia is a leading media and entertainment company that creates and distributes premium and popular content from a diverse array of talented storytellers and journalists to global audiences through its consumer brands including: HBO, HBO Max, Warner Bros., TNT, TBS, truTV, CNN, DC Entertainment, New Line, Cartoon Network, Adult Swim, Turner Classic Movies and others, as well as Xandr’s suite of advanced advertising solutions designed to help to improve advertising for brands, publishers, and consumers.

What do you think? Are you a fan of the Miracle Workers TV series? Will you watch season three on TBS?

I am so glad this series got renewed. It is quirky and out of left field which I truly love. Great cast!

While I enjoy this show, this is definitely a show where I don’t understand how it keeps getting renewed lol

glad this is returning, season 1 was great, for ME season 2 faltered a bit, hopefully season 3 will regain the fun of season 1