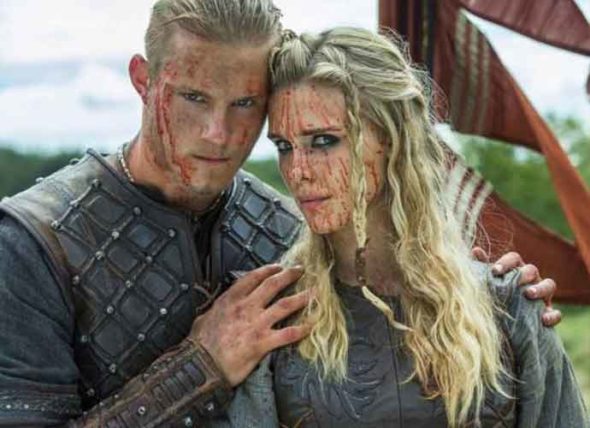 The final episodes of Vikings are now on Amazon Prime. Viewers can check out all six seasons on the streaming service, including the remaining sixth season installments that fans have been waiting for since the first half of the season aired on History Channel a year ago.

The move from History to Amazon not only surprised fans, but the man behind the show, Michael Hirst, as well. Vikings has aired on History, but that cable channel is moving away from weekly scripted programming in favor of mini-series. A new Vikings spin-off (Vikings: Valhalla) is headed to Netflix.

Hirst had no idea the series was headed to Amazon until after the deal was made. He said the following about the move, per The Wrap Pro:

“Nobody told me anything about it. I was told about it as a fait accompli. It didn’t entirely surprise me. The ‘Vikings’ spin-off show, which they’ve already started shooting, is obviously on Netflix. So the streaming services were kind of looking around. The figures were so attractive, apparently to both Amazon and Netflix, so it’s not that surprising.”

He feels that the move is actually good for fans of the historical drama since the final episodes can be binged. Hirst said the following:

“There is an element of frustration, when you have to wait a week for the next episode, when you often really want to find out what happened. And, and also History because of their model, financial model they had ad breaks. And the more successful the show became, the more ad breaks they had. And so I wasn’t particularly happy about that.”

The final episodes of Vikings will still air on History Channel, but that will not happen until later in 2021.

What do you think? Are you a fan of Vikings? Do you plan to watch the end of the series on Amazon Prime?

Where can I find a list of names of all the Episodes starting on Season 1 episode 1 to the very last Episode. I love this show and cried watching how Ragnar was tortured and killed. I miss him , I don’t find Bioun as fantastically cunning, smart and great as Ragnar. So he is a little disappointing. Ivar on the other hand is amassing. I binge watch on Prime but would like the names of all the episodes from beginning to end. Please help

I’m very confused with this Prime thing. I thought S6 was already done. I have it on iTunes. Is this the same thing that Prime’s doing? Or is this like a Part 2 or second half of S6? Prime has a bad habit of claiming they’re the owners of everything when half the time it’s untrue. * * * * * This is a SPOILER which is part of my question and source of my confusion: S6 was the Final Season on iTunes and literally the cast died. How in the world is there new content as S6 “the Final… Read more »

iTunes has season six’s first 10 episodes, which History released in 2019 and 2020. Amazon just released the final 10 episodes of season six.

This is ridiculous and very unfair to the fans of vikings who are the reason this show became popular in the first place. Great way to appreciate and thank the views support after all we are only the reason for the shows success!

I really hope when all is said and done that this get’s released on disc. I have all the seasons so far on DVD. Amazon and Netflix both release very few shows on disc and this is a major disservice to collectors and to those that have supported the media format over the years. We got screwed when Netflix didn’t release the final seasons of “Halt and Catch Fire” and “Turn”. Did I buy 5 1/2 seasons of “Vikings” to potentially have this happen again? I wouldn’t mind a MOD possibility of that’s the only way to get something, but,… Read more »

I’ve been a fan Of Vikings from the first episode. I remember the original movie with Ernest Borgnine as Rathnar, including Tony Curtis and Kirk Douglas. I was disappointed when it appeared there would be no finale and am delighted to see that has changed. Looking forward to watching the last six shows to learn the “fate” of the characters.

I am so disappointed that most people have to wait for late 2021 to see the final Vikings series!!
For those who do not have Amazon prime are being penalized!!
What n why was the reason for the change???
Move back to the history channel where it began and belongs!!!!

Oh great, now fans of the show won’t be able to watch it thanks to streaming. I do not see any reason to pay extorted fees to watch what should be on TV.

Not Everything on Amazon Prime video is behind a paywall