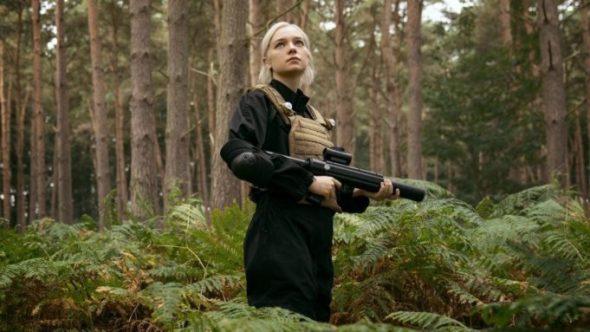 The journey of one extraordinary young woman will continue. Amazon Prime has renewed the Hanna TV series for a third season.

An action series, the Hanna TV show stars Esme Creed-Miles, Mireille Enos, Joel Kinnaman, Noah Taylor, and Dermot Mulroney.  It follows the journey of a woman with unparalleled skill and elite training, as she evades the relentless pursuit of a sinister government agency and tries to unearth the truth behind who she is.

Season two, which was released on July 3rd, picks up where the first season ended — with Hanna (Creed-Miles) now knowing that she’s not the only young woman with her amazing skills. The Utrax program has produced a whole contingent of highly trained teenagers whose development is about to reach the lethal “second phase.”

Here’s the third season announcement. A premiere date will be announced in the future.

What do you think? Have you watched the Hanna TV series? Do you plan on watching season three on Amazon Prime?

I love it… Can’t wait for season 3

Great show! Can’t wait for season 3. Esme is a delight!

I’m a huge fan of the movie and now the series too. I’m very pleased with the direction that they’re taking the series so far.
Great casting, story lines and different twists are making this series stand on its own as well as it did the movie justice with the first season. Come on season 3!! I’m hooked and waiting for it to come…

Near perfect show. Had me hooked for sure. Esme was brilliant. Loved the whole cast. Looking forward to season 3.

Just finished watching season 2. We are sitting on edge of our seat waiting for season 3. Exciting, just on the cutting edge of it could really happen. Thanks for renewing it Amazon.