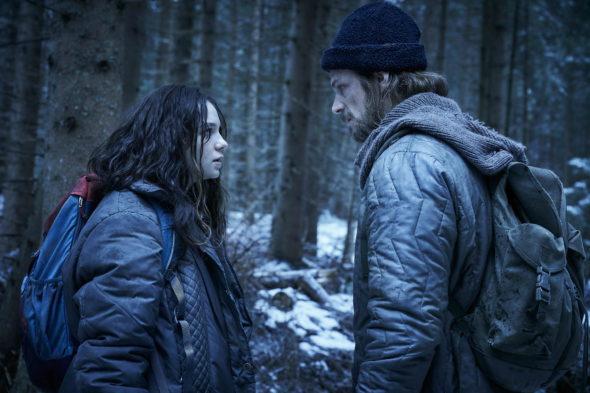 TV show description:
From creator David Farr, the Hanna TV show is based on the 2011 feature film of the same name. The action drama centers on Hanna (Creed-Miles), a young girl who has been raised in the forest.

Fifteen years prior, Erik Heller (Kinnaman) gained access to a secret facility in Romania in order to rescue baby Hanna. Now, the father and daughter live in isolation in the woods in Poland. Throughout her childhood, Erik has trained Hanna to hunt and to kill.

Although she is trying to evade CIA operative Marissa Wiegler (Enos), who has long been pursuing her, Hanna wants to experience the world and starts to stray from home, which is how Wiegler picks up the girl’s scent.

After they are separated, Hanna struggles to get back to her father, and makes a friend who’s her own age — Sophie (Barreto) — all the while trying to stay one step ahead of Marissa.

Series Finale:
Episode #22 —
Hanna and Marissa return to Pioneer headquarters as prisoners but with a mission to unlock the evidence that they need to bring down the program. When they realize that Abbas and his daughter are in danger they race off to rescue them. In the forests outside Vienna, Hanna must save Abbas while Marissa confronts Evans one last time.
First aired: November 24, 2021.

What do you think? Do you like the Hanna TV series? Should this Amazon TV show have been renewed for a fourth season?

Very disappointed to see that they are cancelling this. The 3rd season was too short probably because of the cancellation. They could still do a lot with Hanna’s story. Will be missed, this show.

Enjoyed the movie so watched the series. Found the series to be as interesting as the movie even though different. So much more to learn about Hanna. Please continue to produce new episodes, I will continue to watch.