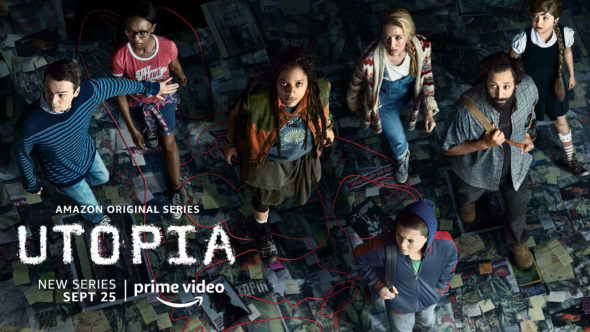 Can some geeks save the world? Has the Utopia TV show been cancelled or renewed for a second season on Amazon? The television vulture is watching all the latest cancellation and renewal news, so this page is the place to track the status of Utopia, season two. Bookmark it, or subscribe for the latest updates. Remember, the television vulture is watching your shows. Are you?

Unless they decide to publicize viewership, it is difficult to predict whether Amazon will cancel or renew Utopia for season two. Since Amazon isn’t ad-supported, it can take a chance on series it believes in but sooner or later it comes down to production costs, versus viewership numbers. Given that this series comes from Flynn and it has some noteworthy talent attached, I think Utopia will be renewed. I’ll keep my ears open and an eye out for news, and will update this page with breaking developments. Subscribe for free alerts on Utopia cancellation or renewal news.

11/30/20 update: Utopia has been cancelled so there won’t be a second season on Amazon Prime Video.

What do you think? Were you hoping that the Utopia TV show would be renewed for a second season? Are you sorry that Amazon cancelled this TV series, instead?

This is a great series but it was left on a massive cliffhanger. Renew Utopia for Season 2!

If Utopia is cancelled, I will honestly cry. I’m a bearded tattooed construction pro, tattoo artist who dresses like a lumberjack every day. I am ashamed to admit that my last ex never saw me cry in our 2 years. I don’t cry. But I will ugly cry over this, flip the table, while I yell no repeatedly.

I hope this show is canceled. As PleaseCancelUtopia said, this show is an affront to everyone involved in the creation, distribution, production of the original program.

Not having seen the channel 4 version, I enjoyed this show very much. It is violent, indeed, but not intended for young audiences. Cusack plays a great villain in this series and I am looking forward to seeing if a second season prevails. Although it may be a touchy subject, it takes my mind off of the tragedies of the world in which we are now living.

Please cancel this show. It is an affront to the original Channel 4 show of the same name.

Not our type of show,very violent and it’s just not our show to watch