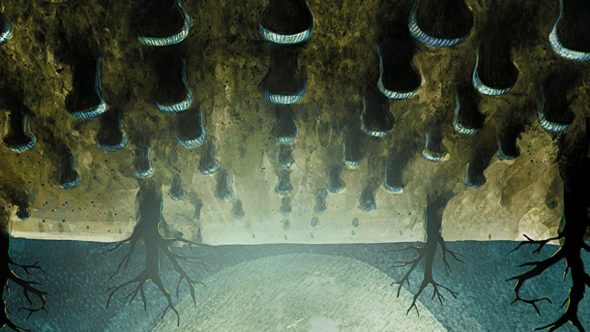 What’s the truth behind our scary stories? Has the Lore TV show been cancelled or renewed for a second season on Amazon? The television vulture is watching all the latest TV cancellation and renewal news, so this page is the place to track the status of Lore, season two. Bookmark it, or subscribe for the latest updates. Remember, the television vulture is watching your shows. Are you?

Unless they decide to publicize its viewership, it is difficult to predict whether Amazon will cancel or renew Lore for season two. The podcast which inspired it is pretty popular though, so it has a built-in fanbase. Because of that, I think it has a good shot at a second season renewal, as long as the creative will to make it is still there, and all parties can agree on money. Since there are no ratings to track, I’ll keep an eye on the trades and update this page as developments break. Subscribe for free updates on any Lore cancellation or renewal news.

2/26 update: Lore is renewed for season two on Amazon, with a new showrunner. Details here.

What do you think? Do you hope the Lore TV show will be renewed for a second season? How would you feel if Amazon cancelled this TV series, instead?

The narration of the first episode sounds … nearly…. computer generated. Is it? Is this a series for kids?

I just love this show, it gives me and my family some thing to talk about, PLEASE continue this show!!!!