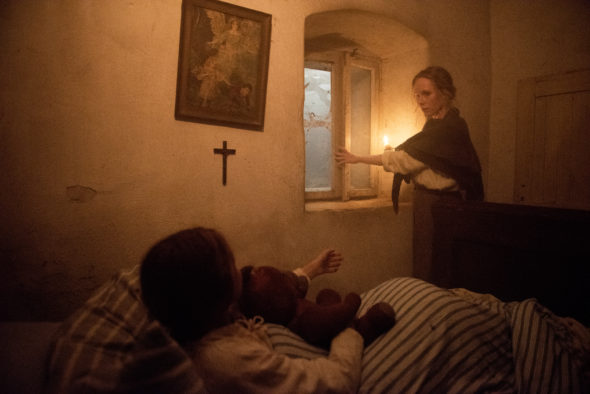 Will the legends continue? Has the Lore TV show been cancelled or renewed for a third season on Amazon? The television vulture is watching all the latest TV cancellation and renewal news, so this page is the place to track the status of Lore, season three. Bookmark it, or subscribe for the latest updates. Remember, the television vulture is watching your shows. Are you?

Unless they decide to publicize its viewership, it is difficult to predict whether Amazon will cancel or renew Lore for season three. A few factors keep the cost down and make another season more likely than not. First of all, since each episode is a new story, they’re not tying up actors the way regular or even limited-event series do. Similarly, so far the seasons have only been six episodes long, which means they’re not even tying up their writers, directors and crew members. In addition, the podcast which inspired it is pretty popular. Flying blind, I’m leaning toward Lore being renewed for a third season. Since there are no ratings to track, I’ll keep an eye on the trades and update this page as developments break. Subscribe for free updates on any Lore cancellation or renewal news.

What do you think? Were you hoping that the Lore TV show would be renewed for season three? Are you sorry that Amazon cancelled this TV series, instead?

What idiot cancelled the show? Really? It is a great show. There are tons of ideas and facts to make more shows. Don’t make excuses.

I would LOVE to see more LORE!!!! I love the darker side of true strange,scary history!. This show could do So much! I love the way they tell the story going between the fact telling and acting, it just makes it so real and the thought that this happened showmenship is amazing.. BRING BACK LORE……SEASON 3 PLEASE

I would like to see Lore Season 3. There are tons of stories still left to see of the over 100 podcast episodes