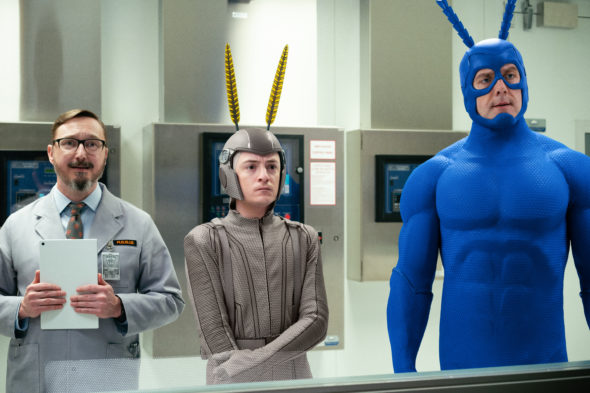 Are The Tick and Arthur still on the job? Has The Tick TV show been cancelled or renewed for a third season on Amazon? The television vulture is watching all the latest TV cancellation and renewal news, so this page is the place to track the status of The Tick season three. Bookmark it, or subscribe for the latest updates. Remember, the television vulture is watching your shows. Are you?

An Amazon Prime Video superhero comedy based on Ben Edlund’s long-running comic, The Tick stars Peter Serafinowicz, Griffin Newman, Valorie Curry, Brendan Hines, Yara Martinez, Scott Speiser, and Jackie Earle Haley. The story unfolds in place in a world where superheroes have been real for many many years and follows a nervous accountant, Arthur Everest (Newman), and a strange (sometimes clueless) blue superhero named The Tick (Serafinowicz). Together, they begin an adventure that’s filled with crazy super villains, dangerous vigilantes, and freakish superheroes.

Unless Amazon releases streaming numbers it’s difficult to know if Amazon will cancel or renew The Tick for season three. Flying blind, I expect a season three renewal, but I’ll update this post as we have more information. Subscribe to receive free updates and alerts.

What do you think? Were you hoping that The Tick TV show would be renewed for a third season? Are you sorry that Amazon cancelled this TV series, instead?

Bring back the tick for a third season

Finally a superhero show thats not boring and has a good story arch and they decide to cancel it. The tick never had a big comic following like most marvel or dc characters so it was nice to have new superheros and a new story and then they cancel. Please bring it back

Why was it cancelled it is such a fun show to watch and experience.

Sad that networks always take off the best shows and leave the crap. This is the best show with perfect actors in the rolls ( of course Overkill is hot hot) and once again if its good ,cancel it
so we have more room for stupid 30 min sitcoms. I hope this comes back someday cause they have a fan for life.

Please please please find another home. Its the best comedy I have seen in a while. I want to know The Ticks origin story, does some finally bring Superian some humble pie and all the rest. I will definitely watch the other series on whatever channel, platform etc. Just please make it happen compadres!!!

Loved the show. Watched it with my 16 year old daughter and 12 year old son. It’s hard to find good comedies that appeal to us. Clever writing and love able characters. I hope it finds a home and we would definitely keep watching it!!!!

Loved the show. Watched it with my 16 and 12 year old- hope it finds a home. It’s hard to find good comedies.

My college-aged daughter and I love watching The Tick together. I can honestly say, not many shows appeal to both of us like The Tick.
Peripheral characters like Tinfoil Kevin, Overkill, and even Lint have worked their way into our hearts and lives (my daughter even nicknamed my Tesla “Danger Boat,” but thankfully it doesn’t talk).
So far, no other Amazon shows I’ve seen are with a darn. Please renew or relocate this fun show.
Amazon should step out of the political arena and concentrate on making good family television.