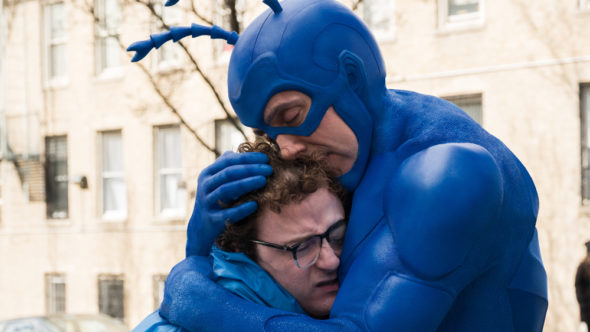 Our favorite big blue superhero has a big fight ahead of him. Amazon has cancelled The Tick TV show after two seasons. However, series creator Ben Edlund says that he and his “compatriots” will to try to keep the series alive and shop season three elsewhere.

A superhero comedy based on Edlund’s long-running comic, The Tick stars Peter Serafinowicz, Griffin Newman, Valorie Curry, Brendan Hines, Yara Martinez, Scott Speiser, and Jackie Earle Haley. The story unfolds in place in a world where superheroes have been real for many many years and follows a nervous accountant, Arthur Everest (Newman), and a strange (sometimes clueless) blue superhero named The Tick (Serafinowicz). Together, they begin an adventure that’s filled with crazy super villains, dangerous vigilantes, and freakish superheroes.

I'm sorry to say Amazon has chosen not to proceed with @TheTickTV I'm not sorry to say I love this show, its cast, its story, and its message. Destiny demands that my compatriots and I now seek a new home for this series.

What do you think? Do you like The Tick TV show? Would you realistically watch season three on another platform?

Love the Tick. Reconsider Amazon, or steal it Netflix or Hulu

Renew the tick.we want it back

Definitely want a season 3! Ill be waiting to watch it 🙂

ABSOLUTELY!!! When I read Amazon canceled this one of a kind delight of a show I really couldn’t believe it… Were they seeing the same show I was?!? Seemingly not, but whoever picks this up you’ve got my monthly subscription or whatever, I’d pay more to see this than just about any other series out there, and I can’t be alone! BRING TICK AND ARTHUR BACK!!!

The Tick is wonderful. We all NEED programs that are fun and entertaining. The characters are Great. I could follow this series forever. Refreshing funny as hell, intelligent, silly, imaginative, I can’t say enough. Anybody who hasn’t watched is missing out. Too bad cable didn’t pick it up. Remember “Third Rock from the Sun”? This has got that potential. Get back on the horse. Clearly not everyone at Amazon is paying attention. Lighten up!!

Bring The Tick Back Amazon! Please!!!! Thank You!

We want the tick season 3 you gib you gib now

I love this adaptation of The Tick, hope it gets picked up by another service and they keep the grit that makes it so special.