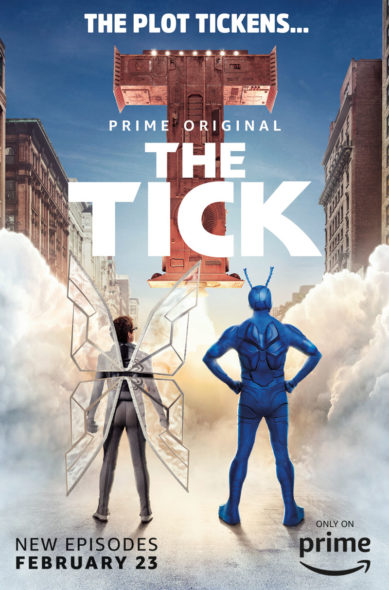 The City is safe. Arthur and The Tick are on their way back. Check out the official Amazon trailer for the second half of The Tick, season one. The superhero series resumes on Amazon on Friday, February 23, 2018.

An Amazon live-action reboot of Ben Edlund’s 2001 animated series, The Tick TV stars Peter Serafinowicz, Griffin Newman, Valorie Curry, Brendan Hines, Yara Martinez, Scott Speiser, Jackie Earle Haley. In a world where superheroes are a fact, nervous accountant Arthur Everest (Newman) develops a theory that The City is being secretly run by The Terror (Haley), a horrific global super villain who’s been believed to be dead for years. Arthur’s investigation leads him to a unique, blue superhero named The Tick (Serafinowicz). Together, they fight crime.

The Tick Season 1B Trailer | Amazon

Here’s the Amazon tease for the second half of The Tick, season one:

In a world where superheroes have been real for decades, an accountant with mental health issues and zero powers comes to realize his city is owned by a global super villain long-thought dead. As he struggles to uncover this conspiracy, he falls in league with a strange blue superhero. Together, they launch into an adventure brimming with crazed archvillains, blood-soaked vigilantes, mad science, and superhuman freakery.

The Tick returns on February 23rd with more action-packed episodes! Evil is on the march, and The City is right in its way. Something terrible is going to happen, and Destiny needs her champions now more than ever. The Tick and Arthur round up the gang in a crash collision course between justice and villainy.

What do you think? How do you like the The Tick TV series? Do you prefer it, or the old, animated version? Let us know, below.