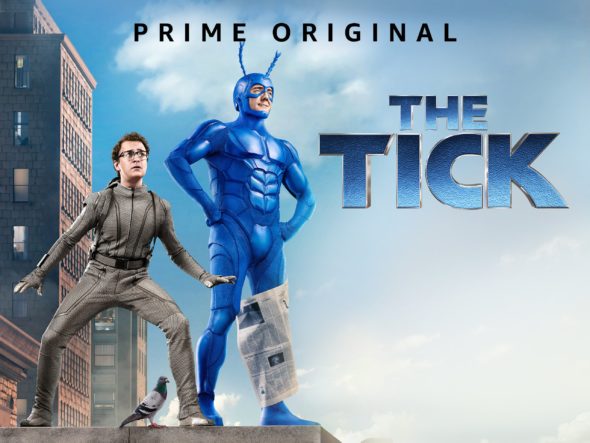 It seems Prime subscribers can’t kick The Tick. The Tick TV show has been renewed for season two on Amazon. Production is set for this year, with an eye toward as 2019 release date. Based on the Ben Edlund comics of the same name, The Tick pilot was introduced as part of Amazon’s pilot season, back in 2016, and the first half of season one debuted on August 25, 2017. The second half of the first season will be released on February 23, 2018.

Earlier this month, Amazon announced that The Tick was among its top series for Prime globally, as well as one of its most streamed series in the U.S.

To subscribe to Amazon Prime, click here (affiliate link). Learn more about the second season renewal of The Tick from this Amazon press release.

The Tick will return with the second half of season one with six additional episodes premiering on February 23, 2018

SEATTLE–(BUSINESS WIRE)–Jan. 17, 2018– (NASDAQ: AMZN) — Hello, Citizens! Amazon Studios today announced it has greenlit a second season of the half-hour superhero series The Tick. The creator of the series Ben Edlund (Firefly, Supernatural, Gotham) will return along with leads Peter Serafinowicz (Guardians of the Galaxy) as The Tick and Griffin Newman (Search Party) as Arthur, with additional casting to be announced. From Amazon Studios and Sony Pictures Television, the second season of The Tick, comprising 10 episodes, will begin production in 2018 and is expected to premiere in 2019 exclusively on Prime Video in over 200 countries exclusively for Prime members.

Neat! As previously announced, Amazon will premiere the highly anticipated second half of The Tick’s first season on February 23, 2018, featuring six all-new episodes of the acclaimed show.

The Tick has received wide critical acclaim and at 93% is Certified Fresh by Rotten Tomatoes. Highlights include:

“The hero we need” – Tim Goodman, The Hollywood Reporter

“Amazon is bringing some welcome wit and warmth to the genre” – Daniel D’Addario, TIME

“[The Tick] is clever and crazy in the right proportions” – Robert Lloyd, Los Angeles Times

“On top of just being a top-notch superhero show, Amazon’s The Tick is so damn refreshing” – Brett White, Decider

“Ben has created a resounding hit while Peter and Griffin have brought Tick and Arthur to indelible life,” said Sharon Yguado, Head of Scripted Series, Amazon Studios. “We can’t wait to bring fans more of the Tick universe soon.”

“I am so excited that Amazon wants to continue this wildly fruitful collaboration and that this amazing cast gets to stay together, and that we get to build this mythos further, wider, deeper, and taller,” said Ben Edlund, series creator and executive producer. “We got a good ball of mud spinning with the right tilt of axis, I’m very happy we have this opportunity to keep peopling it.”

The Tick also commented on today’s news: “You feel it too, don’t you? Destiny’s warm hand in the small of your back, pushing, pushing. She’s on a roll.”

In a world where superheroes have been real for decades, Arthur (Newman), an accountant with mental health issues and zero powers, comes to suspect his city is owned by a global super-villain, The Terror (Jackie Earle Haley) who has been long thought dead. As Arthur struggles to uncover the conspiracy he falls in league with a strange blue superhero – The Tick (Serafinowicz). They launch into an adventure brimming with crazed arch-villains, blood-soaked vigilantes, and superhuman freakery.

What do you think? Are you enjoying the first season of The Tick TV series? Do you plan to check out season two on Amazon? Let us know, below.

What a worthless show, to me. Not a fan of super-stupid “funny” shows. I’m really surprised there will be another season. (Maybe after the first couple episodes it gets better – I will never know!)

Not a very good show for me and I am surprised to see it return.