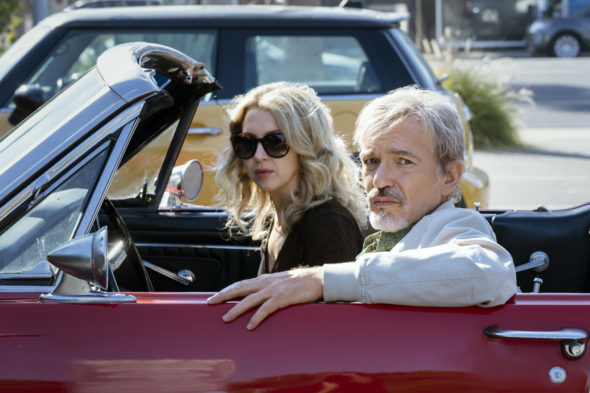 Is Billy McBride still fighting the good fight? Has the Goliath TV show been cancelled or renewed for a third season on Amazon? The television vulture is watching all the latest TV cancellation and renewal news, so this page is the place to track the status of Goliath season three. Bookmark it, or subscribe for the latest updates. Remember, the television vulture is watching your shows. Are you?

Unless they decide to publicize viewership, it is difficult to predict whether Amazon will cancel or renewed Goliath for season three. For now, I’ll keep an eye on the trades and update this page with breaking developments. Subscribe for free Goliath cancellation and renewal alerts.

9/27/18 update: The Goliath TV show has reportedly been renewed for a third season. Details here.

What do you think? Are you glad that the Goliath TV show has been renewed for a third season? How would you feel if Amazon had cancelled this TV series, instead?

Is Dwight Yoakam in this season?

Waiting, quite impatiently, for Goliath season 3. There has GOT TO BE A SEASON 3!

Excited for a 3rd season. This quickly became my favorite show . wow its good !!

I felt that season 2 need at least 1more episode….to give a better ending.
But still can’t wait for season 3
Head down! Great great show 🙂

AMAZING! can’t wait for season 3
The whole cast is fantastic!
Billy Bob like always ,giving us the best performance on the screen and Nina Arianda…. Loveeee her 🙂

Goliath is the best show out hands down! Pleeeeeaase renew!