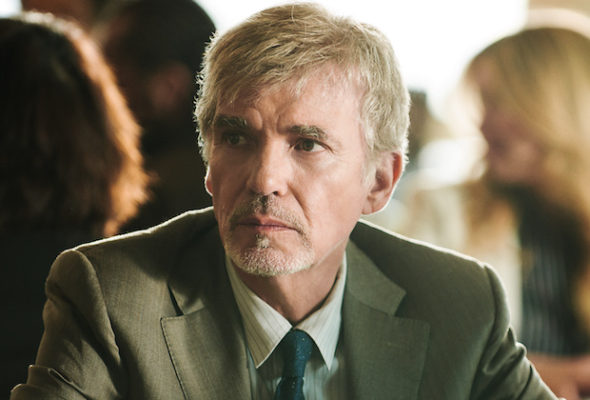 Has Billy made a good enough case for the audience? Has the Goliath TV show been cancelled or renewed for a fourth season on Amazon Prime? The television vulture is watching all the latest cancellation and renewal news, so this page is the place to track the status of Goliath, season four. Bookmark it, or subscribe for the latest updates. Remember, the television vulture is watching your shows. Are you?

Airing on the Amazon Prime streaming service, Goliath stars Billy Bob Thornton, Nina Arianda, Tania Raymonde, Diana Hopper, Ana de la Reguera, and Julie Brister. Season three guests include Dennis Quaid, Amy Brenneman, Griffin Dunne, Sherilyn Fenn, Beau Bridges, Shamier Anderson, Julia Jones, Leslie Grossman, Graham Greene, and Illeana Douglas. The series follows Billy McBride (Thornton), the “David” of the series, who takes on the powerful Goliaths of the justice system and the world. In season three, The unexpected death of an old friend leads Billy McBride to take a case in the drought-stricken Central Valley. He comes face-to-face with a new Goliath — a billionaire rancher (Quaid) and his sister (Brenneman) and their scheme to steal water, California’s most valuable resource. As Billy and his team pursue the truth, old enemies and personal demons resurface and force him to confront his own mortality.

Unless Amazon decides to release viewership numbers, it’s difficult to know if a show like Goliath is doing well enough to be renewed for a fourth season. Considering the talent attached to this series, I suspect that the show will be renewed. I’ll update this page with breaking developments. Subscribe for free alerts on Goliath cancellation or renewal news.

What do you think? Are you glad that the Goliath TV show has been renewed for a fourth and final season? How would you feel if Amazon had simply cancelled this TV series, instead?

Goliath should keep going. It is a great series!

Yes, loved all 3 series. Thanks.

Goliath has been the best crime thriller I’ve watched in years. Every episode is intense and exciting. I can’t wait for Season 4 to begin. So many loose ends. Billy was finally happy at the end of the case, (before you know),. We were left worried for Billy at the end as he lay face down on the ground knocking on heavens door, once again in need of a guardian angel. I truly hope Amazon Prime will continue to sign on Goliath for season 5,6,7 & 8 even. The possible story lines and the fans are here! I wish all… Read more »

Please bring a season 5 of Goliath. The show is AMAZING!

I agree. Don’t let this series go. I love Goliath too!

Well… I just hope they tie all the loose ends before the final chapter credits starts rolling.

Great show, right up there with Breaking Bad, Ozark, Better call Saul and the like.Billy Billy Bob Thornton is the MAN!!!!!

I wish they were going to have more than 4 seasons of Goliath… Fantastic show… !!! Cant wait for season 4 to start..!

I totally agree. Goliath is to good to let go of. Please don’t cut this series short. Like Carnival Row and Saving Dion and the Good Omen, to name a few that just left us hanging.
You put so much into making these series great only to disappointment the fan by ending the series way before it’s time. Unfair to the fans!

I thought this tv sergers was one of the best please return it for more seasons. I thought the cast was super. Loved it!