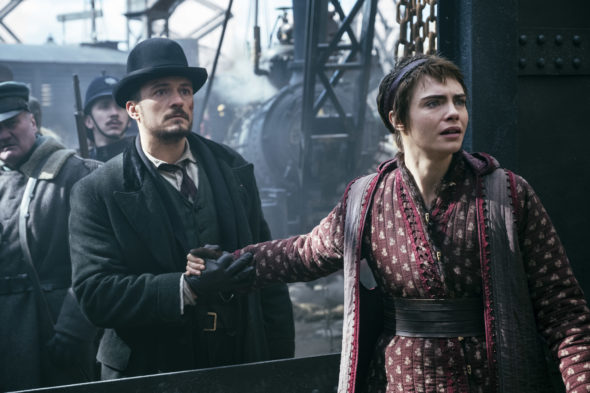 Will the Fae remain on The Row? Has the Carnival Row TV show been cancelled or renewed for a second season on Amazon? The television vulture is watching all the latest TV cancellation and renewal news, so this page is the place to track the status of Carnival Row season two. Bookmark it, or subscribe for the latest updates. Remember, the television vulture is watching your shows. Are you?

An Amazon Prime Video fantasy drama, Carnival Row stars Orlando Bloom, Cara Delevingne, David Gyasi, Karla Crome, Indira Varma, and Tamzin Merchant. It unfolds in a Victorian world, where the Fae — faeries, fauns, trolls, centaurs — and humans live side by side, but not so peacefully. After being driven from Tirnanoc by mankind’s wars, the Fae sought refuge on The Burge’s Carnival Row, where they are eking out bleak existence when a string of murders occurs. Now it is up to human detective Inspector Rycroft Philostrate (Bloom) and faerie Vignette Stonemoss (Delevingne) to battle off the approaching darkness.

Unless they decide to publicize viewership, it is usually difficult to predict whether Amazon will cancel or renew a show like Carnival Row for season two. Not this time, though. The subscription streaming service picked up the second season about a month prior to the series premiere. Because anything can happen, I’ll still keep an eye on the trades and update this page with breaking developments, so subscribe for free Carnival Row cancellation and renewal alerts.

What do you think? Are you happy the Carnival Row TV show will be renewed for a second season? How would you feel had Amazon cancelled this TV series, instead?

It is a good show. Keeps you jumping. Hope it is a go next season.

I love this series. I have watched it three time. Believe it or not there really are times when I hear the singing in my head it’s almost subliminal and it makes me want to watch the entire series gain. Present bring it back.

Yes, they need to continue the series, it is the best of the best!! LOVE IT!!!!!!!!
I never watch TV, however, I am totally addicted to this series!!

I’m with you. I don’t watch tv but Carnival Row brings a brand new addiction. Plus, my doctor just prescribed me 20 year refills of CR. I actually need it to stay alive. Please come back fast Season II