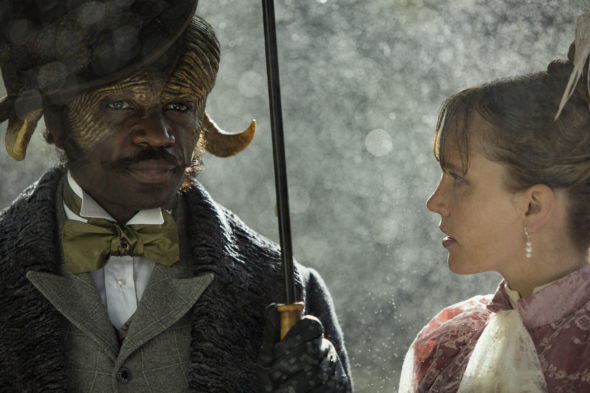 TV show description:
From creators René Echevarria and Travis Beacham, the Carnival Row TV show is a fantasy drama set in a Victorian world. There the Fae and humans live side by side, but not so peacefully.

Once upon a time, Tirnanoc was home to the Fae — faeries, fauns, trolls, centaurs — creatures we think of as mythological. But mankind brought war to their realm, so the Fae sought refuge in The Burgue.

Now, eking out bleak existence on Carnival Row, the Fae are abused, exploited, and treated like animals. There is great tension between them and intolerant humans, but things go from bad to worse when a series of murders strikes the Row.

As a human detective, Inspector Rycroft Philostrate (Bloom) knows this case is the most critical one he has ever worked. Unlike many of his colleagues, Philo has compassion for the Fae and strives to treat them as he would any other person.

Once upon a time, Philo fell in love with a faerie named Vignette Stonemoss (Delevingne), but they were separated by war. Now that she too is a refugee in The Burgue, they rekindle their affair, despite the risk of making themselves targets. What’s more — Vignette is keeping a secret which could endanger everyone.

Despised by humans, the Fae are not permitted to live, love, or fly. As darkness envelops The Burgue, it is up to Philo and Vignette to keep the flame of hope alive.


What do you think? Do you like the Carnival Row TV series? Should this Amazon TV show be cancelled or renewed for another season?

I’m really tired of great shows being cancelled or delayed due to a flu bug. The bug is here to stay. On with the show.. and a great one this is! I agreed with the other comments.

Fantastical beings are not typically done well on television programs. Carnival Row is an outstanding exception in my opinion. It is an excellent series and I hope they continue for many more seasons. I look forward to watching it!

Carnival Row is very well done. The series need to go on!

An amazing series which kept my husband and I absolutely riveted (we don’t always enjoy the same TV programs). The music is also compelling and the atmosphere created is really interesting (a bit of a SteamPunk feel to it). The costumes are brilliant, further enhancing the atmospheric quality of the scenes. Orlando Bloom and Cara Delevingne are surprisingly well-matched in their roles. Well done indeed.