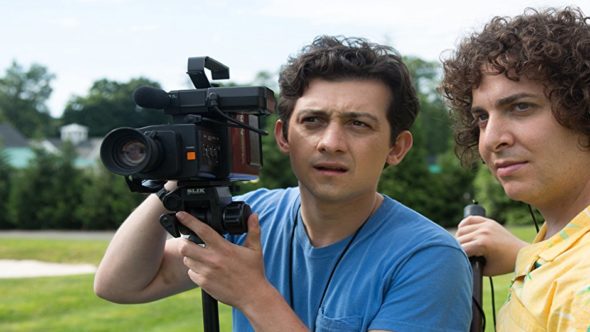 Is this the back nine? Has the Red Oaks TV show been cancelled or renewed for a fourth season on Amazon? The television vulture is watching all the latest TV cancellation and renewal news, so this page is the place to track the status of Red Oaks, season four. Bookmark it, or subscribe for the latest updates. Remember, the television vulture is watching your shows. Are you?

A 1980s coming-of-age comedy streaming on the Amazon Prime Video paid subscription platform, Red Oaks stars Craig Roberts, Paul Reiser, Richard Kind, Jennifer Grey, Alexandra Socha, Oliver Cooper, Ennis Esmer, Gina Gershon, and Alexandra Turshen. The story centers on David Myers (Roberts) and his family and friends at the Red Oaks Country Club. In the third and final season, during the summer of ’87, David is pursuing a directing career in NYC. There’s a roadblock in Wheeler (Cooper) and Misty’s (Turshen) relationship. Getty (Reiser) has decided to make lemonade out of the lemon that is his prison sentence. Back in Jersey, Sam (Kind) and Judy (Grey) explore new passions. Meanwhile, Nash (Esmer) realizes the club could be in big trouble.

The good news is: fans don’t have to worry whether Amazon will cancel or renew Red Oaks for a fourth season. The bad news: when the streaming service last renewed this comedy, they made it clear it was for a third and final season. I do love a mid-autumn dinner at the club, so I must fly. Still, I’ll keep an eye on any developments concerning this Amazon TV series, so subscribe for free updates on any further Red Oaks cancellation or renewal news.

What do you think? Did the Red Oaks TV show end at the right time? Should Amazon have renewed Red Oaks for a fourth season?

They should really keep this show going. Why stop a hit in its prime (no pun intended)? A lot more plot potential and character development possibilities. Does David hook up with the blond wardrobe designer? Do his parents get back together? What happens to David’s career as a director? What happens to Nasser? So many unanswered questions. Pretty please bring it back!

Just found Red Oaks what a joyous series. This is real Lockdown pleasure, in this climate we need more of this. People are looking for nostalgia. The writing was magnificent, and so were the cast. Bring it back please.