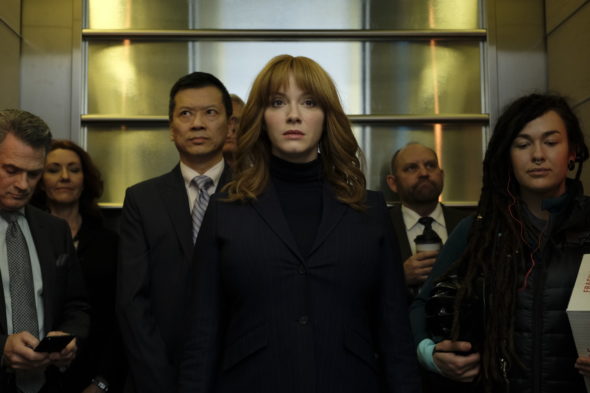 Is Jim Worth coming back for more? Has the Tin Star TV show been cancelled or renewed for a third season on Amazon? The television vulture is watching all the latest TV cancellation and renewal news, so this page is the place to track the status of Tin Star season three. Bookmark it, or subscribe for the latest updates. Remember, the television vulture is watching your shows. Are you?

An Amazon Prime Video crime drama with a dark comedic streak, Tin Star stars Tim Roth, Genevieve O’Reilly, Abigail Lawrie, Christina Hendricks, Ian Puleston-Davies, Oliver Coopersmith, Lynda Boyd, Ryan Kennedy, Sarah Podemski, Anamaria Marinca, John Lynch, and Michelle Thrush. The British-Canadian series unfolds in the Canadian Rockies and centers on former London undercover police detective Jim Worth (Roth), the newly minted police chief of Little Big Bear. While he’s sober now, back in the days when he was not, Jim’s undercover identity, Jack Devlin, would rise to the fore. When a big oil refinery comes to Little Big Bear, crime follows, and tragedy strikes Jim’s family. If he succumbs to the lure of booze and drugs, Jack is sure to emerge and bring even more danger along with him.

Unless they decide to publicize viewership, it is difficult to predict whether Amazon will cancel or renewed Tin Star for season three. Since the show originates from Canada, there are also likely other factors at work. For now, I’ll keep an eye on the trades and update this page with breaking developments. Subscribe for free Tin Star cancellation and renewal alerts.

3/20/19 update: The Tin Star TV show has been renewed for a third and final season.

What do you think? Are you glad that the Tin Star TV show has been renewed for a third season? How would you feel if this Amazon series had been cancelled instead? Are you sorry that there won’t be a fourth season?

This show is fantastic in all respects. However, it must end: whether we see the Worth’s riding off into the sunset or they suffer immeasurable tragedy, this should be closure for them.

love this show to bad its going to end

Loved the first two seasons. I don’t think season two was slow at all. I hope there will be a season 3 even if it happens in Liverpool. I also hope Tomas is with them, Otherwise I will be wondering what happened to him.

Tin Star seasons one and two were awesome!! Not sure where his wife and daughter were at the end of season two. It left it open for a season three…I hope!!!