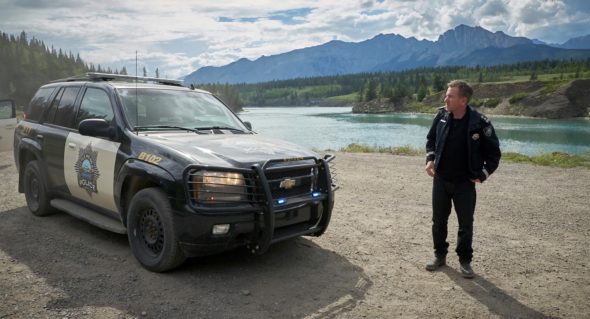 A dedicated family man, cop, and recovering alcoholic, Jim uprooted his family and moved to the Rocky Mountains, in search of a more tranquil existence. Their lives weren’t always so ideal. Before Jim got sober, his undercover identity, Jack Devlin, used to take the wheel of his life. Unlike the substance-free Jim, Jack is sneaky and violent — a true menace. While he can be Jim’s ally, he can also be his downfall.

When Jim first met his wife, Angela (O’Reilly), it was his bad boy Jack persona she fell for. After their daughter, Anna (Lawrie) was born, Anna knew she could no longer welcome his dangerous side in her life. With her help, Jim achieved sobriety by the time their son, Petey, came around. While this kind woman is grateful her husband is on the straight-and-narrow, sometimes she feels frustrated by their domestic serenity.

When a big oil refinery opens up near Little Big Bear, everything changes. Their peaceful little hamlet is now home to new workers looking for drugs, gambling, and hookers, and where those elements are found, organized crime is sure to follow. Now Jim is on a mission to protect his family and their adopted home.

After Jim becomes a target for the criminal element, tragedy strikes his family. How long will it be before he succumbs to the lure of booze and drugs? If he does, Jack is sure to emerge and bring danger along with him.

Series Finale:
Episode #26
This episode has not aired yet.
First aired: TBD

What do you think? Do you like the Tin Star TV series? Should this Amazon Prime TV show be ending with season three? Would you watch a fourth season?

Would really like to see another season of Tin Star, was hooked all along on this show. I agree with other comments on using the F word was too much, but loved the story line.

Really like the show but why do all the characters use the F word every 30 seconds??? Seems like the writers use that as a crutch…

Vitalis
Reply to  Will

Agreed. F-dialog is lazy writing. I refuse to allow the F-word into common everyday parlance. As an exclamation point – alright, but not ladled throughout the dialog.

I love this, but season 2 got a bit crazy.