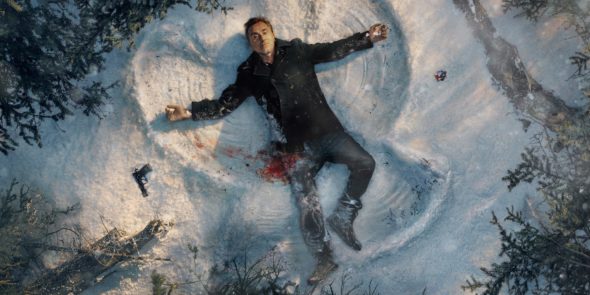 Are you rooting for Jim Worth or Jack Devlin, during the second season of the Tin Star TV show on Amazon Prime Video? As we all know, the Nielsen ratings typically play a big role in determining whether a TV show like Tin Star is cancelled or renewed for season three. Amazon and other streaming platforms, however, collect their own data. If you’ve been watching this TV series, we’d love to know how you feel about the Tin Star season two episodes. We invite you to rate them for us, here. *Status update below.

An Amazon crime drama with a dark comedic streak, Tin Star stars Tim Roth, Genevieve O’Reilly, Abigail Lawrie, Christina Hendricks, Ian Puleston-Davies, Oliver Coopersmith, Lynda Boyd, Ryan Kennedy, Sarah Podemski, Anamaria Marinca, John Lynch, and Michelle Thrush. The British-Canadian series unfolds in the Canadian Rockies and centers on former London undercover police detective Jim Worth (Roth), the newly minted police chief of Little Big Bear. While he’s sober now, back in the days when he was not, Jim’s undercover identity, Jack Devlin, would rise to the fore. When a big oil refinery comes to Little Big Bear, crime follows, and tragedy strikes Jim’s family. If he succumbs to the lure of booze and drugs, Jack is sure to emerge and bring even more danger along with him.

What do you think? Which season two episodes of the Tin Star TV series do you rate as wonderful, terrible, or somewhere between? Should Amazon cancel or renew Tin Star for a third season? Don’t forget to vote, and share your thoughts, below.

*3/20/19 update: The Tin Star TV show has been renewed for a third and final season.

I despise tin stars cast. They are unlikeable, the whole lot, but especially Tim Roth’s character…what an *******! The wife is an enabler, the daughter weak, the police officers too stupid to aboid getting shot and robbed by their own chief. Etc etc etc. I’m watching to see when they all get their due. If Amazon renews this crappy shiw, I will be cancelling.

Brilliant mix of drama and mirth

We love this show and hope that it returns for season 3!