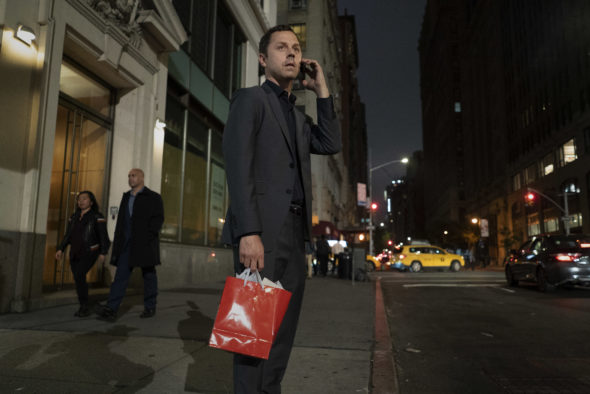 Has Marius Josipović’s luck run out? Is the Sneaky Pete TV show cancelled or renewed for a fourth season on Amazon? The television vulture is watching all the latest TV cancellation and renewal news, so this page is the place to track the status of Sneaky Pete season four. Bookmark it, or subscribe for the latest updates. Remember, the television vulture is watching your shows. Are you?

An Amazon Prime Video crime drama, Sneaky Pete stars Giovanni Ribisi, Marin Ireland, Shane McRae, Libe Barer, Michael Drayer, Peter Gerety, Margo Martindale, Bryan Cranston, and Ethan Embry. The series centers on a con artist named Marius Josipović (Ribisi). After being released from prison, Marius has to go on the run from Vince Lonigan (Cranston), a vicious criminal he once robbed. Fresh out of options, Marius assumes the identity of his former cellmate, Pete Murphy (Embry) and, as a cover, involves himself with Pete’s estranged family.

Unless they decide to publicize viewership, it is difficult to predict whether Amazon will cancel or renew Sneaky Pete for season four. For now, I’ll keep an eye out for news and an ear to the ground and will update this page with breaking developments. Subscribe for free Sneaky Pete cancellation and renewal alerts.

6/4/19 update: Amazon has cancelled the Sneaky Pete TV show so there won’t be a fourth season.

I can’t believe you guys canceled the 4 the season. Giovanni is great. I could watch this for another 10 20 years. I’m going to whatever network that picks it up

It’s a crime they didn’t renew Sneaky Pete for a fourth season. Loved the characters, the writing, and the actors!

Gutted there will be no season 4. Loved all 3 seasons. Bad choice Amazon.

Sneaky pete is an awesome show bring it back

I loved the first three seasons. I’m very bummed that Amazon did not pick up a fourth season.

This is one of the best shows I’ve ever seen and can’t believe you would cancel it. I will not be renewing my prime account any longer