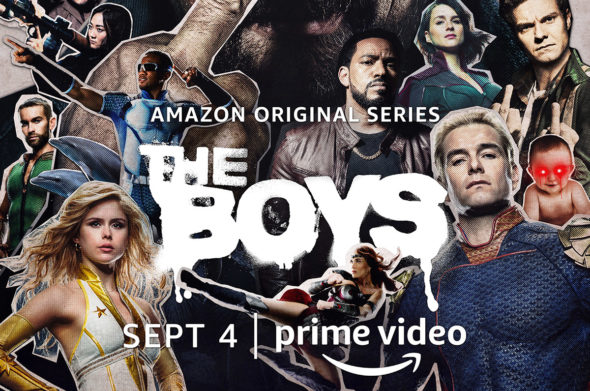 Will the “good guys” win? Has The Boys TV show been cancelled or renewed for a third season on Amazon? The television vulture is watching all the latest cancellation and renewal news, so this page is the place to track the status of The Boys, season three. Bookmark it, or subscribe for the latest updates. Remember, the television vulture is watching your shows. Are you?

Streaming on the Amazon Prime Video subscription service, The Boys stars Karl Urban, Jack Quaid, Antony Starr, Erin Moriarty, Dominique McElligott, Jessie T. Usher, Laz Alonso, Chace Crawford, Tomer Capon, Karen Fukuhara, Nathan Mitchell, Elisabeth Shue, Colby Minifie, and Aya Cash. The story unfolds in a world in which superheroes are more idolized than celebrities, and some of them are abusing their superpowers. After Hughie Campbell’s (Quaid) love becomes collateral damage to one of the Supes of The Seven, he teams up with Billy Butcher (Urban) and his gang of vigilantes called The Boys. Now they’re out to expose the truth about superheroes, and about Vought — the multi-billion dollar conglomerate that both manages the Superheroes and covers up their dirty secrets. In the second season, Butcher, Hughie, and the team are reeling from their losses. On the run from the law, they struggle to fight back against the Superheroes. Meanwhile, Vought cashes in on the panic over Supervillains, and a new hero, Stormfront, shakes up the company and challenges an already unstable Homelander.

There’s no need to worry about The Boys being cancelled right now since the Amazon series has already been renewed for a third season. I’ll keep my ears open and an eye out for news, and will update this page with breaking developments. Subscribe for free alerts on The Boys cancellation or renewal news.

What do you think? Are you glad that The Boys TV show has been renewed for a third season? How would you feel if Amazon Prime Video had cancelled this TV series, instead?

Please renew The Boys. Another great Amazon Show. Unfortunately, Amazon has a sadistic habit of cancelling their great shows like The Tick. Please also renew The Feed, Absentia, Jack Ryan, Tales From the Loop, Homecoming, Good Omens, Bosch. If you are going to cancel great shows like these, what’s the point of having Amazon? Might as well cancel and get another streaming service.