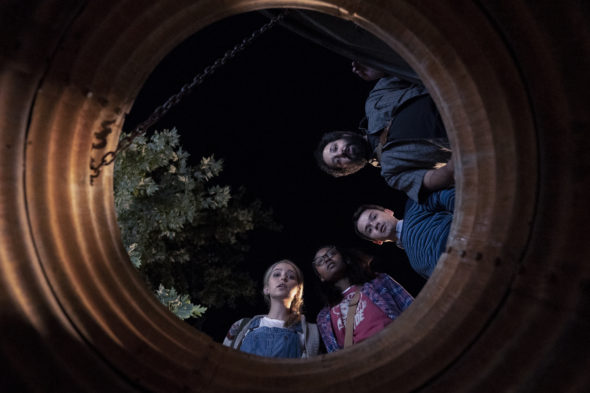 Can these unlikely heroes save the world? the first season of the Utopia TV show on Amazon? As we all know, the Nielsen ratings typically play a big role in determining whether a TV show like Utopia is cancelled or renewed for season two. Amazon and other streaming platforms, however, collect their own data. If you’ve been watching this TV series, we’d love to know how you feel about the first season episodes of Utopia here.  *Status Update Below.

What do you think? Which season one episodes of the Utopia TV series do you rate as wonderful, terrible, or somewhere between? Do you think that Utopia on Amazon should be cancelled or renewed for a second season? Don’t forget to vote, and share your thoughts, below.

*11/30/20 update: Utopia has been cancelled so there won’t be a second season on Amazon Prime Video.

Awful remake dumbed down for a vapid audience.

I really really hope that they make a season 2. It really displays a lot of social commentary about how true our society is in America. As a virologist and microbiologist I loved this series. It definitely needs another season.

This is a downright horror series full of gore. Very bad for a healty nightrest. Point blank executions, horrible torture, what idiots think this is fun to watch? Our youth will become mental patients looking at this cr*p, chainsaw murderers. Don’t watch, don’t show, it’s pure evil. Stop this Amazon!