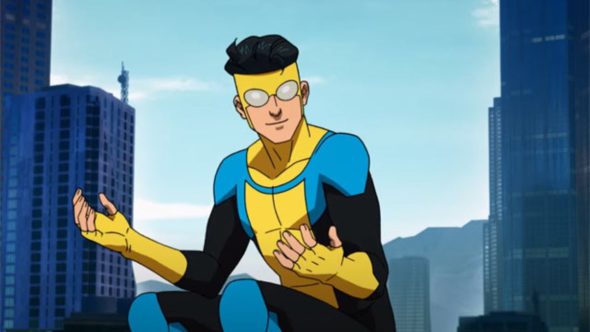 Invincible is coming soon to Amazon Prime Video. The new animated superhero series is from Robert Kirkman, the man behind The Walking Dead, and a trailer has been released. The first season will consist of eight hour-long episodes and the comic book adaptation will the gore that the comics are known for as well as a lot of high-flying action.

Prime Video revealed more about this new series in a press release and at New York Comic Con’s Metaverse.

The teaser trailer gave fans their first look at what to expect from Kirkman’s television adaptation of his iconic comic book, including fan-favorite characters, high-flying action, and all the gore audiences have come to expect from the Invincible comics.

About Invincible
From The Walking Dead creator Robert Kirkman, and based on the Skybound/Image comic of the same name by Kirkman, Cory Walker, and Ryan Ottley, Invincible is an adult animated superhero show that revolves around seventeen-year-old Mark Grayson (Steven Yeun), who’s just like every other guy his age – except that his father is the most powerful superhero on the planet, Omni-Man (J.K. Simmons). But as Mark develops powers of his own, he discovers that his father’s legacy may not be as heroic as it seems.

Check out the trailer for the animated series.

What do you think? Are you a fan of the Invincible comics? Will you watch the new animated series on Amazon Prime Video?

Hell yes! I will watch the Invincible series. I will save my money and buy the animated superhero series when the series becomes available on DVD format.